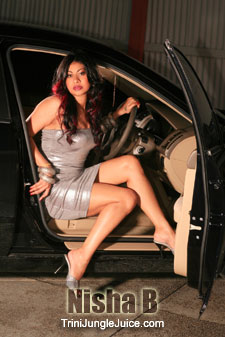 Nisha Bissambhar (Nisha B)
"The Princess of Chutney Soca"

Definitely the most versatile female artiste you would see in the chutney/bollywood world. Why? Because she is capable of singing any song that challenge her career. Nisha’s life and being celebrates the essence of music. Having grown up with the ever presence of rhythm, and strong Indian cultural background, this talented singer devoted herself to the music industry at a very tender age.

After completing her secondary studies, and having gained distinctions in English language and literature, Nisha’s career officially began. She envisioned a life of being kept close to her music, and so she indulged in numerous cultural activities and programs.

Nisha claims this venture paved the road for her career and gave her the inspiration to move onwards. In the year 1999, she released The Scorpion, a song that was voted one of the most popular songs of all time. Some time after, together with the empowerment of her two brothers, Anil B and Ravi B, Karma was formed. Nisha says her love for music is cemented with Karma and her strength lies in her passion.

Facts that you won’t know.

Nisha B is the first chutney artiste to ever recorded a song with a Jamaican artiste (Beenie Man) and created a new genre 'D.C.' (Dancehall Chutney). Also the first chutney female artiste to host both a radio and television program. Nisha B is also a song writer and has the talent and capability of patterning different changes in tone  of  her voice to match any genres.

In 2002, Nisha B was awarded Best New Artist at the chutney hall of fame awards. In 2005/2008, she was awarded Best Female Artiste; an award  she believes is her motivation to only work harder.

Some of the highlights of her career was singing a duet with former Prime Minister Mr. Basdeo Panday at a private function, having a heart to heart talk with Alka Yagnik and learning of Alka’s secret tea, and being nominated for the Caribbean’s best soca chutney female artiste. She has met with Rajesh Khanna, Zeenath Aman, Maxi Priest, Baby Sham, Beenie Man, Sonu Nigam, Kumar Sanu, Machel Montano and Anup Jalouta, just to name a few, but the ultimate personality she dreams of meeting Lata Mangeshkar of course.

At present Nisha holds the position of a radio broadcaster at radio 90.5 fm where she co-hosts The Night Life with her brother Ravi B and also she is the host of the ever popular t.v show on Synergy T.V. ‘Chutney Island’. As for further plans? She has just completed her  videos ‘The Bison’ and ‘Tell Meh Where Yuh From’ and looks forward to her solo album along with joint productions with other artistes. She, along with her brothers and the band Karma, is sponsored by Francis Fashions Shoe Locker, Stag, A Man’s Beer, and she  looks forward to future endorsements.

22 Responses to "Nisha B (Karma) Biography"