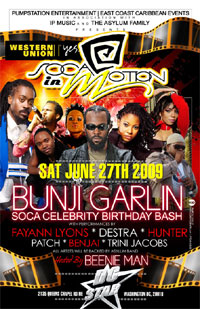 New York, NY (Ms. RAINE INC): With Caribbean-American Heritage being the national theme for June, Caribbean celebrities are hitting the American mainstream in full force.  On June 27th, Trinidad and Tobago's  beloved Soca star Bunji Garlin--known as the 'Fire Man' for his blazing stage performances--is taking over the United States  headquarters with Soca in Motion, a birthday celebration featuring Soca music's biggest stars, and a guest appearance from Jamaica's Dancehall King. Held on the weekend when Washington DC celebrates Caribbean culture with their annual island-styled Carnival, Garlin's birthday party is billed to be one of the biggest Soca events ever to strike the capital city.

Soca is a musical fusion of uptempo African, East Indian, and Latin music poured over the drum- and bass-heavy rhythms that have become the signature sound of the Caribbean islands.  Since 1993, the sounds of Soca, Reggae, and other island music have filled Washington D.C. every last weekend in June, with a vibrant full-costume parade and international marketplace. According to carnival organizers DC Caribbean Carnival Inc, the event attracts over 300,000 people annually, and is still growing. DC Caribbean Carnival maintains that one of the focal points of this annual celebration is to develop and encourage cross-cultural programs and inter-community relations to expand awareness of Caribbean cultural traditions, and to educate both young people and adults in Caribbean arts in the Washington DC Metro area.

That is what Caribbean culture is about.  This time we are headed straight for the US capital. Everyone is invited to come out and enjoy-especially President Obama," jokes Garlin.

In his official proclamation declaring June as National Caribbean Heritage Month in the United States, President Obama states "Caribbean Americans bring a unique and vibrant culture. This multilingual and multiethnic tradition has strengthened our social fabric and enriched the diversity of our Nation."

"Carnival is one of the things that Caribbean people look forward to every year; it is the one day or weekend that we can come out in our full colors and have the rest of the city celebrate being Caribbean with us," states Moses 'Beenie Man' Davis. "Carnival spirit is so powerful that the US said one-day is not enough-give them people the  whole month," he jokes while adding that Bunji Garlin's birthday party is going to be one of the highlights of DC Carnival this year.

"Big up Bunji Garlin on his Earthstrong (birthday) party," states Beenie Man. "The King of the Dancehall with the Soca Fire Man-nothing but pure explosion a go di deh," he adds in his local Caribbean tongue.

"After this one, they are going to need another Ice Age to cool the place down, because we are going to set DC ablaze," Garlin exclaims, ending with his signature "Fiiiyaaah" stage call.