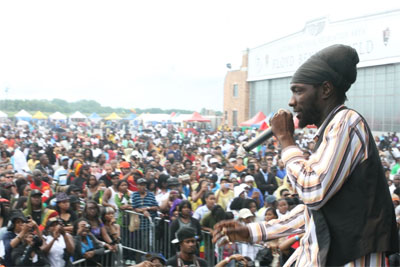 New York, NY (Ms. RAINE INC.) - Father's Day turned out be a wet, wild, and somewhat wacky day in Brooklyn as thousands of Caribbean music fans stormed Floyd Bennett Field to witness rousing performances and outrageous stage antics from some of the biggest names in Dancehall and Reggae, and up and coming culturally diverse Caribbean-inspired acts. 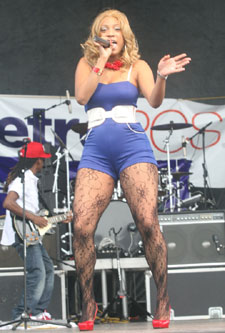 With funky performances from Reggae fusion acts like the African-Asian-Jamaican Ska band the Brown Rice Family, 'Skragga' band The Rudie Crew, King Django, down-home Reggae/Soul band The Peoples led by acclaimed actor Leon, and the original Jew-maican Benny Bwoy with this partner in rhyme Lynx, the good vibes and lively pace were set very early, despite the frequent rain showers.

Rhythm and Blues sirens Kendra Granville and Kayla Bliss cooled down the pace with syrupy sweet vocals while Essence brought in a wild and colorful Caribbean carnival vibe with an up tempo performance complete with costumes and carnival masqueraders. Dancehall/pop songstress Barbee was well received, while Guyanese Roots Reggae crooner Natural Black gave a magical performance that had the swelling crowd singing along to nearly every word.

Hip Hop legend Doug E. Fresh, proved that he is the 'world's greatest entertainer' with a brief, yet engaging performance that was reminiscent of the classic Hip Hop that we all know and love with rapping, beat boxing, and call-and-response. Special guest Vicious (formerly Lil' Vicious) performed his cross over hit "Freaks" while Doug E. Fresh beat-boxed the Dancehall 'riddim'.

Dancers Ding Dong and Milkshake kept the crowd both amused and entertained with wild stage moves and wacky antics that pulled members of the crowd on stage. Dancehall vixen Spice also captivated the crowd with a routine that showed off her agility and versatility as performer, while showcasing her bold and frank nature as a deejay. Her controversial hit single "Ramping Shop" earned her a booming forward, as she deejayed over a recorded track with lyrics from song mate Vybz Kartel.

Despite a particularly rough down pour, the crowd stayed put for a robust, soul-stirring set by Roots sensation Tarrus Riley.  From hits like "Beware" to "Lion Paw" to "She's Royal" to "Start Anew" the crowd hung on every word.  Accented by legendary saxophonist Dean Fraser, Riley's set earned thunderous applause and cheers from the moved, albeit soaked, audience. 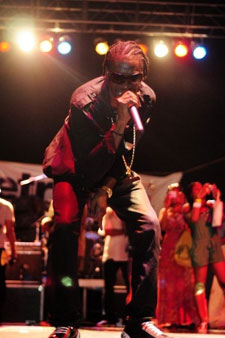 The night belonged to the 'Fire Man' Capleton whose blazing stage performance halted the rain and fully consumed the audience.  Famous for both his socially conscious lyrics and his hyper energetic performances, the Fire Man did not disappoint, with both brand new and classic material from his 20+ year catalogue of 'hits pon top a hits.'

Clad in purple and white with one studded glove, the 'Energy God" Elephant Man commanded the stage with his usually unusual 'punk rock' Dancehall style and rowdy stage manner as he scampered from one side of the stage to the other, reeling of dance hits like "Nuh Linga," "Gully Creeper," "Signal the Plane," and "Sweep."

Dancehall's Alliance brought down the house with a triple dose of star power. Dancehall crooning sensation Serani delighted the ladies with his billboard hitting single "No Games," along with "Doh," "She Loves Me," and other popular singles. Alliance leader and 'Five Star General' Bounty Killer came out to a thunderous cheers from the audience and delivered a well-received set of classic Dancehall material like "Miss Ivy's Last Son," "Coppershot," and "Lodge." The night ended with the 'Gully God' Mavado, who had patrons beating down the side of the Aviator Sports Center building in response to monster anthems like "Gully Side," "On the Rock," "I'm Blessed" and "So Special." 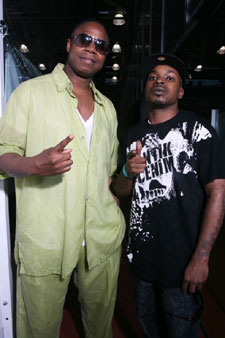 While the night ended on a very positive note, the Brooklyn Music Festival was not without hiccups. The Aviator Sports and Recreation security did an excellent job of maintaining crowd control and quickly handling any security issues, and the majority of the show was incident free. Very wet, wild, and at time even wacky, the Brooklyn Music Festival definitely made its mark as a celebration honoring both Caribbean-American Heritage and Black Music Month.

"The promoters, producers, and staff of the Brooklyn Music Festival are thankful to Aviator Sports and Recreation, our sponsors, the artists, and most of all, the patrons that made the Brooklyn Music Festival a glowing success," states festival organizer George Crooks. "We look forward to having a bigger, and better festival next year-and hopefully a dry one too," Crooks jokes, stating that this year the rain provided "showers of blessings."