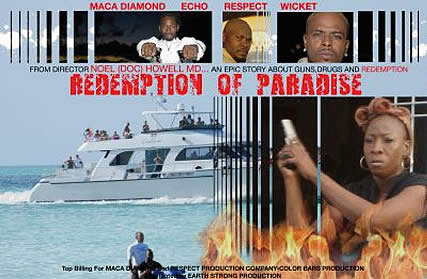 "Redemption of Paradise" is the first large scale release for I&I Entertainment, which was founded by Noel "Doc" Howell, who directed and co-wrote the film with producer Courtney Boyd.  Set in the fictional island of Paradise, it chronicles the efforts of Millie, played by Macka Diamond, to take a stand against the corruption that infests her hometown. The film details the struggles in crime-ridden communities throughout the Caribbean and will resonate with urban audiences everywhere.  "Redemption of Paradise" is a direct to DVD and online release and will be available in retail stores, as well as Amazon and Netflix.

For marketing and distribution, I&I Entertainment has teamed up with Earthstrong Productions, an independent, globally distributed entertainment media company.  Upcoming projects include a reality show called "Reggae Buss," as well as a mini-series called "Serious Times." Despite the challenges, the ability to create and distribute films in today's economy is important to Dr. Howell.

"So far I have financed all of my projects myself and expect that 'Redemption of Paradise' will open the door to more opportunities," says Dr. Howell.  "With major blockbusters like “Pirates of the Caribbean” highlighting our naturally beautiful islands coupled with our rich authentic history, I believe there are still more stories for us to share with the world. Who better to tell our story than us?"

As a divorced father of two, Dr. Howell managed to juggle fatherhood, working at his medical clinic and attending film school. A graduate of both University of Miami medical school and NYU film school, Dr. Howell grew up in Antigua where his love of literature helped forged his passion for storytelling. While he is still a practicing pediatrician in New York City, Dr. Howell desires to also use filmmaking as his vehicle of change and provide a positive voice in the mist of social, moral and financial decay.

"I want to make movies that wake up the conscience of people,” says Dr. Howell. "I like filmmakers like Spike Lee and Quentin Tarantino who are not afraid to let their films have a voice. I want people to reflect on issues when they see my films."