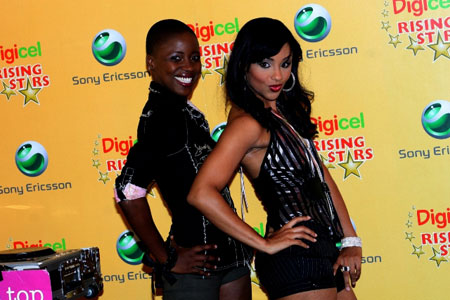 Now in the sixth season, the mother-of-two is Handling the nervous contestants, the celebrity guests, and the hot features of the über cool Chill Room.

Monday July 13; Kingston, Jamaica: She started out as member of the production team, but in season four (2007) of Digicel Rising Stars Kerie 'Kiki' Lewis stole the hearts of Jamaicans when she became the host of the famous Sony Ericsson Chill Room.

Lewis had started out with the Digicel Rising Stars team on the production side in the first season of the ground breaking show, but then “took a break, and was concentrating on something different” while seasons two and three cemented Digicel Rising Stars as the most popular television show in Jamaica’s history. Now, in the sixth season, the mother-of-two is handling the nervous contestants, the celebrity guests, and the hot features of the über cool Sony Ericsson Chill Room.

And how does the petite bombshell feel about being beamed into the homes of more than 1-million Jamaicans? She reveals: “It’s been an amazing experience for me, more so because I was on the production side of things. When you’re in production, you’re really just focused on getting the show off the ground, and making sure everything goes fine. Now, I get to interact more with the contestants. I get to know them, and ride with them on their journey on the show. It’s really amazing, and thrilling.”

The Holy Childhood alumni doesn’t usually go on the road to watch auditions, something that makes her even more excited about the start of the live show round for this year’s Digicel Rising Stars.

“What! I’m so looking forward to is getting to know the contestants even more this year. Last year, we went through a teething process... we moved to a new location, we had a new host, and we were all trying to find some footing. But we’ve all grown, and season six has started out great.  I don’t know what to more expect this year, but I know it will be good,” Lewis said.

“What Digicel Rising Stars is doing is very important. Outside of the entertainment value to Jamaicans, the show gives people a chance to have a dream come true. One person will be put on the fast track to becoming an artiste, and we unearth so much talent each year, and give people a chance.” She maintained.

Kiki's Chill Room made its redesigned debut on Sunday Night (July 12) with some brand new themes. Tahnida Nunes Executive Producer of Digicel Rising Stars speaks of the changes: "It's a kinda ’50’s diner kinda feel, and KFC and Pepsi  are more integrated into it and for Kiki instead of sitting at a couch, she is sitting at a booth, with the contestants and she is now able to move around. Inside the Chill Room are things like high tables and chairs for interviews with contestants and guests.”

Watch Kiki every Sunday night on TVJ and she takes you closer to the contestants on Digicel Rising Stars.