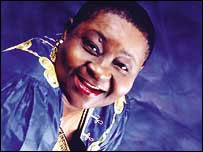 PORT OF SPAIN, TRINIDAD. A documentary focusing on the story of our very own Calypso Rose is on stream for completion in October this year. Calypso Diva, produced by Maturity Music with the support of the Trinidad and Tobago Entertainment Company Limited (T&T Ent) will give deep insight into this calypso monarch that still enjoys a vibrant career today.

Over the decades of her successful career Calypso Rose, or McArtha Lewis, has composed over 800 songs. Her 1966 hit Fire in Me Wire has since become a calypso anthem. Rose was the first female to win the Trinidad Road March Competition, in 1977 with the still popular Tempo. She held the Calypso Queen title for five years running. She has also won both the Trinidad Calypso Crown and Road March competitions in 1978, the Sunshine Award in 1989 and the Trinidad and Tobago Hummingbird Medal in 2000.

Calypso Rose was one of the first females to challenge her counterparts in the male dominated world calypso music. It is this tenacity that has ensured her longevity and numerous achievements.

Maturity Music is producing the documentary film which focuses on Calypso Rose’s story and follows her to various ports of her life, including Tobago- the land of her birth, Port of Spain – where her career really took flight, New York – her current home, Liberia- where she became a UNICEF Goodwill Ambassador for former child soldiers and Paris where she recorded her latest album.

Calypso Diva documents Rose’s successes and the difficulties of existing in two distinct cultural realities. In it she opens up about her past and displays that familiar hope and confidence about the future.

T&T Ent is proud to be associated with a production of this nature that salutes the beauty and resilience of one of our most worthy calypso icons.

The T&T Ent Revolving Investment Arrangement (RIA) has been established to provide assistance for entertainment practitioners with international projects related to the entertainment industry. The revolving nature of the investment insures that recipients reinvest resources into to RIA for others to access at a future date.

Interested persons can check out T&T Ent’s website www.ttentonline.com to get updates on other projects that the Trinidad and Tobago Entertainment Company is involved in and to register for the national Entertainment E-registry.