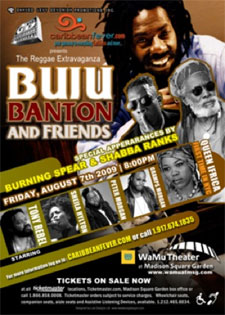 (New York, NY/Kingston, JA - 28, July 2009) Gargamel Music is proud to announce that our CEO, international reggae icon, Buju Banton, successfully wrapped his two month Rasta Got Soul European Tour with a final show in Malaga, Spain this past weekend! The rigorous 40-city jaunt was booked by Michel Jovanovic of MediaCom Agency in France, and included stops in Norway, Sweden, Denmark, Austria, Belgium and the UK.

Up next, Buju Banton & Friends will once again light up the stage at the WaMu Theater at Madison Square Garden on Friday August 7th at 8:00pm. This year's extravaganza will feature special guest appearances by Burning Spear, Shabba Ranks, Gramps & Peter Morgan, Queen Ifrica and Tony Rebel.

Buju is planning a special set for the occasion that is sure to include tracks from his critically acclaimed new album, Rasta Got Soul, on the Gargamel Music label.

The show's promoter, veteran radio DJ and personality Dahved Levy of WBLS, predicts, "This will be the 10th sold out show for Buju in The Garden; Rasta does not only have soul, Rasta inspires... and Rasta makes history."

Tickets for Buju Banton & Friends are being sold at special stimulus package prices: $69.50 - $99.50, inclusive of facility fees. Purchase at The Garden Box Office and all Ticketmaster locations as well as online: