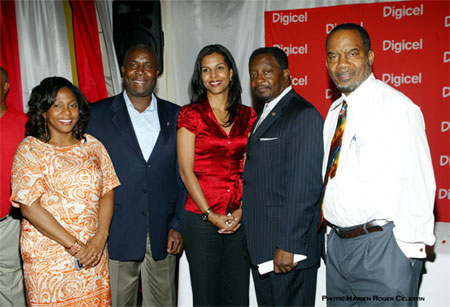 The tournament is in its 18th year and features 12 representative teams from the Caribbean and South America. It is currently entering the playoff stages of the tournament, with Jamaica and St. Vincent leading the build up to the final, which takes place on Sunday, September 6th in Brooklyn, New York. Digicel will provide much-needed funds to the staging of the weekly rounds of the tournament, as well as marketing support and investment in player development.

Fred Ballantyne, President of Caribbean Cup Inc. which organizes the tournament, welcomed Digicel’s sponsorship, and said: “Having a company like Digicel, which is so heavily involved in football in the Caribbean and Central America, come on board and support the Digicel Caribbean Cup New York is fantastic. With the tournament now in its 18th year, we need all the assistance we can get to make sure that our players get all the necessary support to further their development and to ensure that fans can enjoy some great displays of Caribbean football talent.”

Digicel’s General Manager for the Diaspora Region, Valerie Estimé, said: “Football is one of the most popular sports in the world and Digicel is committed to supporting the development of football across the Caribbean and Central American region. With so many Caribbean nationals living in New York passionately supporting their teams, it is only natural that we extend our support to the Digicel Caribbean Cup New York.

“Digicel is also committed to ensuring that those living in the Diaspora region can avail of Digicel’s exciting range of services, and through our sponsorship of the Digicel Caribbean Cup New York, more and more people will be able to access these services.”

Digicel currently offers a range of innovative products and services to Caribbean and Central American nationals living in the Diaspora, including online top up – where customers can log on to any Digicel website and top up or send minutes to people back home, retail top up – where customers can go into any one of over 100,000 retail stores in the UK, Canada, the Caribbean and the USA and purchase Digicel top up or send Digicel minutes to friends and relatives in their home country, and Digicel calling cards – where customers calling friends and family in Haiti and Jamaica can call home at competitive rates using minutes stored on the calling card.

As in the Caribbean and Central America, Digicel will be rolling out some exciting promotions and competitions over the coming weeks to support the Digicel Caribbean Cup New York – these include Call Home Sundays where customers can call home using Digicel calling cards. Football fans can expect to enjoy a great day of entertainment as they support their teams at the Jefferson stadium in Brooklyn, courtesy of Digicel.

The 12 representative teams taking part in the Digicel Caribbean Cup New York are;

As well as sponsoring 16 national football associations, federations and Digicel international matches in the Caribbean and Central America, Digicel is the main sponsor of the Digicel Caribbean Championships and the Copa de Naciones Digicel – which are the sole qualifying tournaments for the CONCACAF Gold Cup.

The Central American leg of the Digicel Kick Start Clinics is taking place in four countries in August 2009, with former Liverpool football legend, Ian Rush, taking up the role of Head Coach, where we he will select six of the most talented footballers who will spend on week training in Manchester City AFC in October 2009.

Digicel is the lead sponsor of Caribbean, Central American and South Pacific sports teams, including the West Indies Cricket Team, Special Olympics teams throughout the region and national rugby teams in the South Pacific. Digicel is also title sponsor of the Digicel Caribbean Championships and the Copa de Naciones Digicel, which are the Caribbean and Central American qualifiers to the CONCACAF Gold Cup.