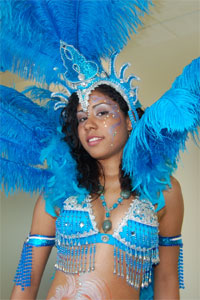 Private/Special Section is a Carnival section in a major band, it is not a direct part of the band direct camp, but usually a separate group of persons/or person wishing to showcase in a particular band of choice. Most likely it is an all inclusive section where you pay one price and get your carnival costume, specially catered food and drinks. Packages may vary with free give-aways, the type of food and services offered.

The front-line is a costume in any section which may generally have a back pack, larger head-piece and or more adornments or parts and costs more than a 'regular' option, it may also be accompanied by additional freebies.  The masquerader is generally entitled to what the special section is offering, in addition to what drinks, food and services the band is offering, but this varies from band to band.

The T&T phenomenon which took over Carnival a few years ago, has hit the Notting Hill Carnival in London with a bang.

Jewels de Carnaval (JdC), a special section, will be coming under the banner of Arawak Mas Band for the Notting Hill Carnival.
Arawak Mas Band, formed in 2001, with over 100 masqueraders, participated in Notting Hill Carnival and is now one of the largest premium all inclusive carnival band experiences in London, with over 350 Masqueraders and an extended international network of costume bands.

Section Leader Bea Thomas who is directly responsible for the development of the new committee, is the driving force behind the development of Jewels de Carnaval has many years of experience within the Carnival arena as an administrator with Arawak Band ensuring that registrations and costume distribution was a smooth process and band members were always kept up to date via news letters, etc. Additionally, she has experienced the 'other side of the fence' as a masquerader, portraying an individual costume each year for Notting Hill Carnival and actively participating in the Luton, Reading & Rotterdam, Barbados Crop Over & Trinidad & Tobago Carnivals.  She is an avid supporter of Soca/Calypso music and seeks to assist in its promotion whenever an opportunity arises. 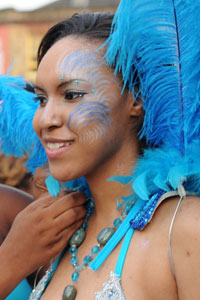 They also have on board as the Communications & Marketing Co-ordinator Denise Darlington.  Currently in London, reading for a degree in Tourism Management, Ms. Darlington brings with her a wealth of hands on experience and knowledge in marketing, public & media relations and event co-ordination, having worked in the media (television, radio and internet), charity and events industries in Trinidad & Tobago for over 10 years.  She also has extensive knowledge of 'band development' being part of the Legacy Carnival Band committee in T&T from its inception. Ms. Darlington has also experienced the 'other side of the fence' as a masquerader having started out 'playing mas' with Glen Carvahlo and moving on to Legends and eventually Legacy in Trinidad & Tobago as well as having participated in Barbados Crop Over, Notting Hill & West Indian Labour Day Parade in New York. She is also an avid soca/calypso music supporter and passionate about T&T's Carnival and culture.

On entry to the launch, which was held at the ACE Fusion restaurant in the Battersea area of London, one was warmly welcomed by the JdC reception team, uniformly clad in string vests for the ladies and t-shirts for the guys matching the colours of their costume.  The music was clearly tastefully selected and complimented the evening's proceedings as a mix of Soca music, which included not only old school soca/calypso, but also music from the different Caribbean islands and new releases.

The evening was a lively mix of music, mas, conversation and food -which was served by the gracious staff.  Succulent chicken wings, with an adequate amount of spices, rum soaked prawns, chips and complimentary rum punch with promises of the same high quality come Notting Hill Carnival Day as the restaurant will be catering for the JdC masqueraders.

Guests and patrons also had the opportunity to see the costumes up close as they were modelled on the evening. The front-line being modelled by Miss Carivog UK Model International - Sophia Williams.  As the costumed models danced through the aisles and eventually out on to the pavement area, for a few moments St. John's Hill, Battersea, was transfixed as bus drivers, cabs, cars and pedestrians stopped to have a look and take photos with the models.

The name Jewels de Carnaval, as the audience was informed, signifies, not only the beaded costuming which reflects like jewels caught in sunlight, but also the people, the music, the vibe and reflection of the togetherness as T&T's Carnival celebrations are famous for. After all, we are jewels of the carnival on parade day.

The committee seeks to encourage the production of original, quality, hand made costumes, and to support the employment and training of youth in Trinidad & Tobago especially in the area of mas. 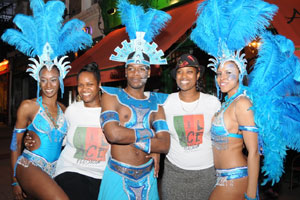 With this in mind, JdC looked to T&T for their costume production, which has been designed and made by 'Big' Mike Antoine of Legacy Mas Band.

Crème du Soiree, the portrayal, is a  bringing together of 'the best of the night' in performances which can be seen in Las Vegas, the water shows, theatrical performances and discos, a culmination.

The illusion will be brought to life by the masquerader, parading in the costume as the beading and appliquéd stone workings reflect the sun, and each movement made enhanced by the swoosh and sway of beads, mimicking the various activities in a Caribbean fashion as they gyrate and jump through the streets for Notting Hill Carnival 2008, the sounds of scintillating and driving Soca music in the air, leaving the onlooker in awe wondering state at the acrobatic feats of the waistline.

Turquoise blue sets the imagery of water, where silver beading and appliqué imply the glitz and glamour of Las Vegas night life and the costumed performers going through their routines......Making the masquerader indeed Crème du Soiree....

Payments can be made via their website which makes full use of the secure payment services of Pay Pal.