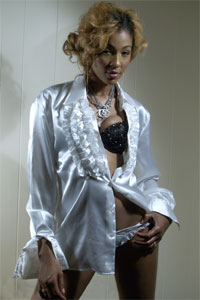 With a bit over a week until Reggae Sumfest's Dancehall Night on July 17, D'Angel is excitedly preparing for her debut Reggae Sumfest performance.

Wednesday, July 9, 2008; Kingston, Jamaica: - D'Angel promises both fans and observers that she plans to make her Reggae Sumfest debut performance spectacular with an unforgettable show.  D'Angel explains the reason for her special performance plans:  "I think that if you perform all the time and you always doing the same thing, people will get bored.  So for big performances you need to really make it special.  Sumfest is going to be special, trust me."

D'Angel has added several accolades to her portfolio since the beginning of 2008, she performed at the 27th IRAWMA Awards at the Apollo Theatre in New York and was nominated for Best Female Deejay. In addition, she was granted a Business Management scholarship from Caribbean Institute of Business along with being added to the RE-TV 2008 Spring Edition School Tour.   D'Angel was also the proud recipient of the Digicel's People's Choice Award at the Style Observer Awards 2008.

D'Angel also added Actress to her list of achievements when she made an appearance on Jamaica's most watched soap opera: Royal Palm Estate where she played the role of 'Rainbow', a TV show host.  With her addition to the Reggae Sumfest line up, D'Angel now feels that she is finally closer to her goal of becoming one of the top dancehall artistes on the world stage.  D'Angel explains: "Every Jamaican artiste wants to perform at Sumfest.  It's like a rite of passage.  Once you are on Sumfest you really 'buss' as a reggae / dancehall artiste.

"I am so excited.  Ever since I started in the music business I have wanted to perform at Reggae Sumfest.  I think it came just at the right time, I have a good catalogue of music and I am constantly improving on my stage performance. My time has come and I am ready."

Not wanting to give away the surprise, D'Angel says this about her debut performance at Reggae Sumfest on Thursday July 17: "Sumfest patrons can expect a performance they will never forget.  I'm going to give them something to talk about."