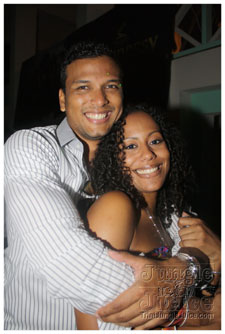 Your eyes finally crack after some serious partying and liming the night before, a sea dip already in order, so what to do next? The usual answer, hold tight until Baje J'Ouvert, Wadadah and Foreday Morning. But this year, "The Bathsheba Experience" came to the rescue! And boy, were we excited!!

CROWD:
Fact #1: There's one thing almost certain at an All Inclusive day fete, partygoers (especially the women) make that extra effort to dress nice. Thank you ladies! Soca Warriors Shaka Hislop with the newly formed ESPN Caribbean team were enjoying the VIP treatment, alongside some Caribbean artists and promoters.

VIBE:
Fact #2: Unlike Fact #1, there's never any certainty that a well-dressed crowd will let their hair down, kick their heels off and party. This wasn't the case at The Bathsheba Experience a' tall, a' tall. With an international cast of DJs, the musical vibes were flowing, and host Davhed Levy let the surprise fireworks fly, not once ... but twice before the evening came to an end.

VENUE/ACCESSIBILITY:
The party was set against the backdrop of the picturesque surf of the East Coast of Barbados. And for those of you that don't know Barbados, Bathsheba isn't right round d corner! So, we must commend the promoters for the great signage - it really helped with getting to the venue.

The venue was advertised as "Once in a Blue Moon Villa", however numerous partygoers felt it should have been "One in a Blue Moon Beach House"! Everyone did enjoy partying with the cool Caribbean sea breeze blowing on them however.

FOOD & DRINKS:
There was a decent variety of food, which tasted great - especially the pork! Besides needing more choices for vegetarians, the biggest complaint were the small serving plates used. We've concluded that people rather eat one full serving, then drink and party at an All Inclusive than having to make several food trips to satisfy their bellies.

SERVICE:
If you arrive at an All Inclusive, and there's staff waiting to park your car then shuttle you to the venue ... it's clear that the promoters did their homework. Nice touch guys!

For their 1st installment, The Bathsheba Experience secured position #4 on the TJJ Guru Report Card for Crop Over 2009 letting the other established parties know that they are here to stay. We're looking forward to next year.