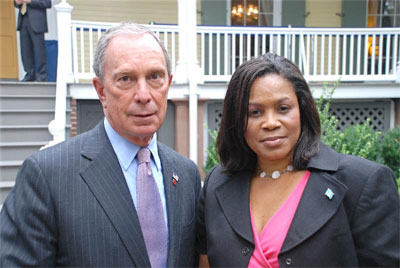 NEW YORK (August 19, 2009) - Caribbean residents in New York are gearing up for one of the biggest events in the American cultural calendar - the West Indian American Day Labor Carnival to be held on Monday, September 7, 2009.

At a reception last week at Gracie Mansion - the official residence of New York City's Mayor Michael Bloomberg - hundreds of Caribbean community influencers joined the Mayor and his staff to celebrate the 42nd anniversary of the parade which attracts millions of revelers and onlookers each year on to Brooklyn's Eastern Parkway.

"Labor Day in New York is where Caribbean culture takes center stage and Caribbean nationals - from Guyana to Grenada - display solidarity and diversity as well as the creativity of one of the most remarkable regions of the world," said Lorine St. Jules of the St. Lucia Tourist Board in New York, who said her nation is working closely with Caribbean-American audiences to promote tourism, investment and economic development in St. Lucia and the wider Caribbean.

"The West Indian American Day Carnival and Parade (is) the city's big end-of-summer party, and it brings millions of people to Brooklyn from all over the United States, Canada, and certainly from the West Indies. The parade is a wonderful celebration of the diversity that makes New York the greatest city in the world," said Mayor Bloomberg as he addressed Caribbean-Americans at Gracie Mansion.

Carnival association president, Yolanda Lezama-Clark, said that while the association fulfills its mission of celebrating Caribbean heritage and culture on the world stage, spotlighting social and economic issues was also extremely important. "This year we have chosen cancer awareness and Census 2010," she said, announcing "Jump for the Cure, Jump Up and Be Counted!" as the theme of this year's carnival.

To this end, the association is partnering with the American Cancer Society in a social awareness campaign to get people tested, while the alliance with the US Census Bureau will spread the message of the importance of being counted in the upcoming 2010 Census. "This is a particularly important issue for Caribbean people who have traditionally been undercounted. But more so, being counted is about our economic power. (It is) important in order to ensure increasing community resources in the areas of housing, (healthcare), and education," she said.

Also attending the reception were members of the St. Lucian carnival band, Karma, which is set to make a splash on the parkway next month.

One of the Windward Islands of the West Indies' Lesser Antilles, St. Lucia (pronounced Saint LOO-sha) is nestled halfway down the eastern Caribbean archipelago. The "Helen of the West Indies," St. Lucia is known for its natural beauty and diverse attractions, including the signature Piton Mountains - a UNESCO World Heritage Site - a tropical rainforest and one of the world's few drive-in volcanoes. Culturally rich offerings include the bustling marketplace in the capital of Castries, quaint fishing villages along the coastline, and the annual St. Lucia Jazz festival. St. Lucia's wide range of accommodations includes world-class, five-star resorts; all-inclusive resorts; intimate inns and value-oriented properties. For information about the island of St. Lucia, call (888) 4- STLUCIA, or visit www.stlucia.org.