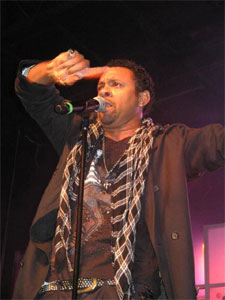 The staging of the 2nd Annual Ottawa Reggae Festival was a huge success!  Thousands of music Lovers skanked, cheered and rocked with their favourite artists over three days, being treated to Reggae, Soca, Reggaetone and Hip Hop.  Hosted by Natasha Von Castle and Clev Cartel, fans were impressed with this years selection of introductory acts which included Rexy Rolle, Diction, Island Jam and Ras Lee.  Artists who made an exceptional impact include the Yardiz Dancers, Acoustic Soul singer Rita Carter who earned a standing ovation for her set, as well as the Rock Reggae group Loud Love whose blend of Rock and Reggae was so impressive, their set was extended an extra 10 minutes.  Atlanta's Hustle Boy proved that Southern Rap is appreciated in the North, based on massive crowd participation.

"This year we wanted to give everyone something they could appreciate in addition to Reggae" said Festival President Benjamin Williams.

Trinidad and Tobago's Shurwayne Winchester entertained the crowd with his awesome vocals, and incredible stage show.  Fans immediately drew near to the stage for his performance of "Come Beta," "Dead or Alive" and "Make It Yours" featuring Maxi Priest.  Commanding the audience, Shurwayne guided fans through dance moves which coordinated with his.  At the end of his performance, several fans rushed to the side stage to have their t-shirts and CD's autographed by the megastar!

Don Corleone recording artist, Pressure (Buss Pipe) of the US Virgin Islands delivered an outstanding set with his Live band, ensuring that he will perform in Canada again in the near future.  Fans could not get enough of the Culture artist as they sang every song word for word to songs like "Love and Affection," "So Appealing" and "Be Free."  Pressure also performed songs from his upcoming album 'For The Poor' which will be released early 2010.

Tanya Stephens set was also well received as the artist advised fans that the world has 'too many good girls with bad guys, and too many bad guys with good girls!'  Giving advice to the mis-matched couples through song, Tanya had fans eating out of the palm of her hands as she delivered hits "These Streets," "Yuh Nuh Ready," and "It's A Pity!"  One fan drove from Montreal, Canada with her boyfriend just to see Tanya perform.  "I wanted my boyfriend to hear Tanya's lyrics live.  Tanya's music definitely represents the ladies," said Roxanne with excitement!

Undoubtedly, the highlight of the festival was Shaggy's performance.  At 10:15pm, Natasha Von Castle took the stage telling fans that Shaggy didn't believe they wanted to see him.  On the count of three, fans were asked to yell his name to prove they really wanted him, and yell they did!  Taking the stage dressed in a black trench coat, Shaggy delivered hit after hit; "Oh Carolina," "It Wasn't Me," "Angel" and "Church Heathen" were only a few of the many songs the seasoned artist performed.  Each movement from the mega star caused fans to erupt in deafening cheers.

Sponsored by VP Records, Heineken, Ottawa Kiosk, Coca Cola, Red Bull and others, the 2nd annual Ottawa Reggae Festival was a success!  Pictures from the Festival are below, with additional photo's available at www.ottawareggaefestival.com, or www.myspace.com/L3Magazine photo album.