From Crop Over To Labour Day 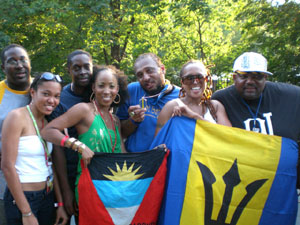 In September 2007 Pyramid Entertainment became the first entertainment company from the Caribbean to sponsor a music truck at Labour Day Carnival in conjunction with Mount Gay Rum. The 40 ft truck set the Eastern Parkway ablaze with performances from some of the Caribbean's leading soca entertainers. Alongside the Pyramid line up of acts which included Lil Rick, Peter Ram, Biggie Irie and Barry Chandler, was soca queen Alison Hinds, Omar Mc Quilkin and Tizzy from the El A Kru band, Antigua. Also on board was Bajan born, New York based deejay Dahved Levy and AJ Calloway (formerly of BET).

The truck attracted significant media attention as it proceeded along the carnival route of the Eastern Parkway in high visibility to the more than 1 million spectators and revelers who attended the Labour Day celebrations.

This year, Pyramid and Mount Gay Rum will once again join the Sesame Flyer's band as it celebrates its 25th year in the entertainment business as one of the largest mas bands in New York. Sesame Flyers not only boasts over 1500 revelers but has won the title.

"Band of the Year" for ten consecutive years. Sesame Flyers International remains one of the most highly respected community oriented organizations in New York and recently made yet another unprecedented step when it launched Sesame TV, an online television programme featuring some of the work of the organization and its affiliate companies.

Following on the success of their hugely popular hits at Barbados' Crop Over this year, Pyramid artistes will join a line up of other hugely successful Caribbean artistes on the branded music truck to entertain their fans and promote their music.

Pyramid is proud to be associated with the Sesame Flyers band as it celebrates its 25th year in the entertainment industry. "We are heartened by the professionalism of this organization and welcome the opportunity to celebrate with them under this year's theme "Caribbean Heritage." Music is enjoyed by people of all nationalities and the opportunity to perform and promote our music during this prestigious year for Sesame Flyers will undoubtedly further fuel the harmony, integration, diversity and unity amongst all Caribbean people. The alliance between Pyramid Entertainment and Sesame Flyers is a true demonstration of Caribbean unity and has greatly expanded the promotion of our artistes beyond those which were previously utilized during the Labour day celebrations," says CEO of Pyramid, Santia Bradshaw.

To register to be a part of the Sesame Flyers Carnival band, log on to www.sesamecarnival.com and for more information about the artistes who will be performing on the music truck log on to www.pyramidartists.com.