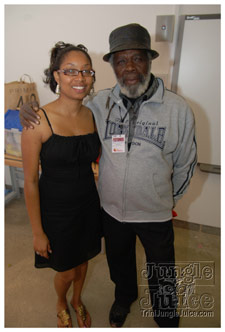 Well as you know the saying goes, "once we do it once, we have to do it twice and maybe thrice!" I will stop here ... don't know what I am really saying but, The Notting Hill Fete-Lympics© has returned, but it is 2009 .... oh my where has that year gone so quickly (View Notting Hill 2008 Fete-Lympics©). The pace begun early this year and tonight it’s the Calypso & Soca Splash with live performances from Shadow & Neil Iwer George "The Big Man In The Business".

I work whole week in the office except this Friday … I had to stay home and do the people and dem work but as soon as 5 pm hit … is up to Luton, hop on that train and get busy … fill meh belly with some dead chicken (cause you know you cyah eat ah chicken alive) and we hop on the train for the 45 minute journey from London to Bedfordshire.

Let me tell you something – where else are you going to get great bar-b-que chicken with potato salad, a cold Carib, a completely fabulous venue, mature & entertaining people plus two live riveting performances from icons of soca in the UK? Answer – nowhere!!

The UK Centre For Carnival Arts (UKCCA) came together and brought Shadow & Iwer George live and direct from Trinidad & Tobago to perform for an hour plus some! With MC duties done by Martin Jay, for the first hour or so, the patrons were entertained by Poser singing a couple of his hits before he had to jet off. I missed the entrée however; when Martin told the crowd to please move the chairs back to the side so that the dance floor would be opened I knew it was time for business!

Warming our appetites for more, Martin played all the groovy soca tunes he can find while people mingled, socialised and drank from the well stocked and efficient bar – there were no queues, no long waiting … nada … bar staff was on point! Nothing ran out; and at drinks reasonably priced only with a £10.00 entry fee for the event, I think we were on for a splendid night.

With a brief intermission, and brief is exactly the word I am going to use, Iwer George stormed the stage with versions of all his tunes such as "Bottom In De Road", "Gimmie Ah Bligh", "We Reach" and his ever famous "Ready". Folks in a split 5 second interview with Iwer, he told me that he sings the word sixty-three (63) times in the chorus … ready ready ready ready ready ready ready ready … I cannot do it !!! KKKAAABOOOOM!!!!! Iwer performed in a very interactive manner, talking to the two girls infront the stage, forming a congo line circling the venue, as well as running a small competition between a Bajan Beauty and a Trini Dude for who could sing the song chorus from "Ready" … yes folks … sixty-three (63) times!!!!

Yes folks, an enjoyable night for the mature and sexy crowd! I want to personally thank Tracey-Anne and Zena from the UKCCA for their friendliness and support and look forward to partying with you whenever UKCCA has an event!!

Looking for my night train,
Amiel aka Guinness Juice (or to others Scorn Juice)