Till Drunk Do Us Part "360 Degrees of Bar" Review

>> View Till Drunk Do Us Part Gallery 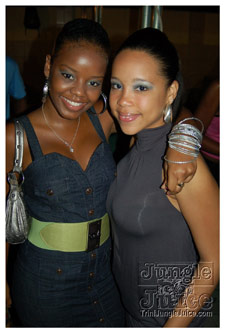 So tonight was Till Drunk Do Us Part with the largest bar ever. Can anybody say 360 degrees of bar? Drink Rum Cocktails, Scotch and Chasers, Vodka and Chasers, Screwdrivers, Pile Drivers, Blow Shots, Tequila, Hard Wine, Stag, Carib, Shandy, Stout, Brown Cows, Rum & Coke, Puncheon, Water, Green Sands and More all for FREE. If you did Economics you would know that there is no such thing as a free lunch. Economics however said nothing of alcohol and so Till Drunk has stepped up to the plate with free drinks ever since it’s conception complimenting that with an affordable door price.

The party took awhile to start swinging but when it started, it swung hard. People were sharking, palancing and anything you wanna call it. It was a nice place to be on a Saturday. The venue switched from Pier 1 to St. John’s to accommodate people from outside of the West as well  as allow them to have 360 degrees of bar.

Now let’s give out some Jonathan Mark© awards to you know…yea just shout out a few of the individuals who truly let themselves go. Believe it or not I really asked some of these people their names just with this in mind because it’s the people that make the party.

Starhouse definitely found the right people though. The best dancers go to the Till Drunk crew who were repping hard in their jerseys. You know who you are…you were official. Men like Shaka and Devon Browne/Harry…whatever names you two criminals go by, you enjoy yourself!!

Then fuss Till Drunk was the place to be, a man show me how he and his boys left Alchemy (I’m not hating on the Alchemy) to celebrate his Birthday in Till Drunk. So at the same time TJJ wishes Maxiemiano Day a Happy Birthday. (I didn’t make that up!) Not to mention his wonderfully looking friends who added some sensation to the party. I telling you on Saturday if you weren’t there you missed out.

So look out for the next Till Drunk. The word around is that it will be called Still Drunk and might be held up in the Starhouse. Well if you didn’t know, Till Drunk is a network event so we wanna give a bligh to the entire network. Yea all peeps that made it a success. Also thanks guys for showing TJJ love as usual. All we hadda say at the end is…nice party, great environment and free drinks. What more you need??!!

>> View Till Drunk Do Us Part Gallery