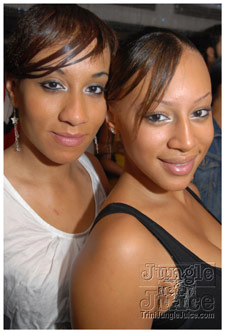 It is Carnival Sunday Night in Notting Hill 2009 Fete-Lympics© and we are looking for another event to attend after a fantastic and uber sexy time in the Chocolate Mas 2009! We were definitely looking for more! The TJJ crew was in full swing with Daddy, Red Sno Cone, Scorn, Dr. Ram Dass, Beth and newly aquired personal assistant Diva Juice, who by the way was sleeping up ah storm on the way to the fete!

Ruby Blue is the location for tonight's late night shenanigans and with some familiar faces at the door, the clip of six strolled in to have a good, but relaxing time! However, after an entire and early start in Chocolate (yes, man like Daddy Juice could not believe we start so early), the whole crew was hungry... and badda bing badda boom, we had to like ourselves with Hasan and De Four Caters who had on sale Pelau, Roti, Curry Potato & Channa and Aloo Pies. Definitely have to full we belly, so we sit down and talk some talk and enjoy the ambiance of the Ruby Blue while we wait for the party to really take off.

That was some good times at that dinner table; after all who is going to resist conversations about men wearing non-prescription glasses, a man being asked if he wants to "party" while using the urinal or the real topic of the night..."squirting!" Think about it this way, there was some graphic teachings using the flower on the table... KABOOM!!!

There was a slow but steady flow of people into the venue and the dancefloor was not crowded. People were dancing and enjoying the vibe and music being played by the DJs on the night. A complete mixture of music was played and that added to the element of the night. Most people were drinking tap water after all that drinking in Chocolate Mas earlier (the bar was ital).

It was a really mellow night and most people just enjoyed the simple vibe, the sexy venue, the relaxing but socialising music provided, and of course... the mouth watering food! Tomorrow is the big and final day of the jump up and the melee. Who say PoisonUK? Who say Lagniappe with the TriniPosseUK or Shipwrecked crew? Who knows?? But one thing for sure.... TJJ will be there!!

Amiel aka Scorn Juice
... sipping on tap water while my eyes battle to stay open