By TJJ Office Mgr
Published on 31-Aug-09
New York, New York -- August 31, 2009 -- Irish and Chin is bringing an unforgettable night of Reggae Dancehall and sound system entertainment, dubbed "Reeewind, The Past Meets The Present," to New York on Saturday, October 3, 2009.  "Reeewind" is a once-in-a-lifetime event featuring the legendary ... 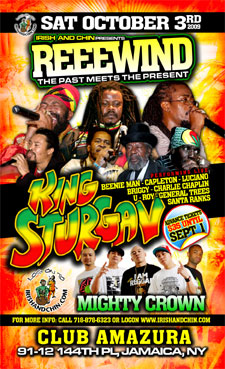 Guaranteed to be a sell-off, the artists will gather and perform on the sounds, sharing the same vibes on foundation riddims. The night is pegged to be chock-full of memorable performances by Reggae music's most vivid entertainers.  So, if you are a Reggae Dancehall enthusiast and fan of the era when leading sounds featured artists(deejays), this night is for you.  "Reeewind" will also serve as an ideal event for the younger generation of Dancehall fans.  Early juggling will set the pace for the main event.

It's no secret that many of Reggae Dancehall's leading artists were born from legendary sound systems.  However, in recent years, it seems as if there has been a disconnect between artist and sound.  Rather, it seems that many artists have forgotten from where they came or who "buss" their music, making them the stars they are today. In an effort to preserve and highlight the rich culture and fusion of the Reggae Dancehall music and the sound system, Irish and Chin came up with the foundation for "Reeewind."   Additionally, Irish and Chin wanted to recapture the vibes of happier times.  This star studded affair will boast the magnitude of the rub-a-dub era, one of raw talent and spontaneity. Trust and believe.....it's not to be missed.

"Currently, Dancehall music is going through a critical time.... sadly, it's become dark and violent," says Garfield "Chin" Bourne of Irish and Chin, Inc.  "As a lover of sound system and Dancehall culture, I thought it would be ideal to bring things back to a brighter time when music was happy and when artists performed in harmony."

Irish and Chin incorporated the "The Past Meets the Present" theme into the event, as they wanted to appeal to mutiple generations. King Stur Gav, is one of Reggae music's most celebrated sound systems. Playing a key role in the development of Reggae music, King Stur Gav rose to fame in the 70's under the ownership of none-other-than U-Roy.  This rub-a-dub sound boasted a roster of performing artists that read like a who's who of Reggae music at the time.  Some of the sound's key performers that helped define Reggae music included class acts U-Roy, Josey Wales, Brigadier Jerry and Charlie Chaplin to name a few. A pioneer sound in every sense of the word, King Stur Gav has been a champion of Reggae music for four decades. General Trees, a later figure on the King Stur Gav sound system, rose to fame as a popular "speed talkin" deejay of the 80s.

Beenie Man, Capleton and Luciano are modern day artists who have a love for 'rub-a-dub' culture.  While both Beenie Man and Capleton evolved from sound system culture, Luciano has soared as a phenomenal singer. Although the fans of these leading artists have seen them perform in today's standard style, they have yet to experience them get down in this way.  Mighty Crown was added to the event because of their catalogue of vintage selections and their profound respect of yesterday's Dancehall music.

"Reeewind" will be one of a series of foundation events planned by Irish and Chin.