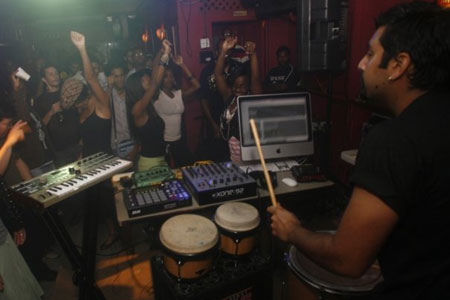 September 7, 2009, Port of Spain, Trinidad.  Musician and producer Keshav Chandradath Singh will give a peep inside his artistic process this Thursday at the Above Group’s exciting series of artist talks titled ‘Show and Tell’ at their offices at Building 7 Fernandes Industrial Complex, Laventille at 7.30 p.m.

A drummer from birth Chandrath Singh draws on that driving nerve centre of Trinidad and Tobago culture in its many cultural manifestations for inspiration.

Chandradath Singh who is a member of 3 Canal’s backing band Cut + Clear and creative collaborator with countless local and international artists, will share with the audience his explorations of rhythm in both traditional and electronic contexts.

Thursday night promises to be an exciting and interactive session, as he also plans to share some of his original Drum N Bass creations released under the nom de guerre LAZA Beam.

This is the fifth installment of the Show and Tell series being hosted by design firm Above Group.  Thursday night's event also features Cuban born animator Alexander Rodriguez.

For more information on the Show and Tell series contact Above Group at 626-5695.