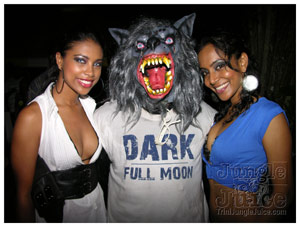 It had Ishmael as the DJ, so you know they had the best DJ. Dey get rel points for organizing a shuttle service as well. One thing is sure, they cut out no expenses to give you the full theme. Plasma screens playing MJ's Thriller, the stage over a swamp or so, fog from the trees and lights on the branches!! You made people want to be in the bush.

CROWD:
A solid amount of people occupied the party at around 2 am. I guess that's what time people transformed and reached the party. Only like 5 people dressed up, some put on white others put on black. I don't know how people reached with green and stuff though, because...umm hello,  the theme of the party clearly called for all black!

VENUE/ACCESSIBILITY:
This was a tricky one to rate. The venue itself suited the theme of the party. The thing was the drive to reach there. It kinda is weird driving down Chagaramas with no lights and you being the only car on the long road with a few signs.I actually felt loss on a straight road. But the venue itself is wonderful, keep it to yourself lol.

VIBES:
I think everyone just said let's have fun and the party started getting going. Everyone became friends with everyone. The bus driver on the way back might have been annoyed but for everyone else, it was rel kix. People were pelting waist, everybody was smiling. How would you all say it..... We came, We Saw, We Entertained.

SERVICE:
Good service. It had alot of security patrolling and I didn't even have to wait at the bar. We got quick service. The only thing is, you had to park in the bush but hey we in the forest.

FOOD/DRINK:
I didn't really inspect the drinks but there was drinks flowing all night. We got to sample some Dark Wolf premium beer with some Ice Cold Mocha Coffee. We even got some Spicy Holiday Peanuts. It had a place for selling Fries, Hotdogs  and Burgers so a man could have eat ah food.


COST/VALUE:
For cost I don't judge. I always ask people what they though of the party. Some were happy others hoped to get a lil food on that $220. I can say that only increasing the door price by $20 was very reasonable.