Italy crowns Tifa as the new Queen Of The Dancehall 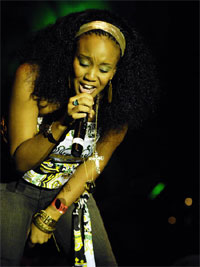 August 9, 2008, Kingston, Jamaica - Diva of the Dancehall, Latifa Brown a.k.a Tifa has set a blazing trail all across Europe.  Over the last three weeks, this dancehall star has been touring across Europe, and has already had performances in Austria and Germany, with upcoming performances in Italy, Czech Republic, Slovakia, Switzerland and Berlin.    Tifa and Ward 21 performed to over 40,000 screaming fans in Wuppertal, Germany who stayed in the pouring rain just see these stars in action.

Leading up to Tifa's performance in Leece, Italy on the 10th of August, Tifa was featured on the cover of News Fever Magazine (Italian Publication), along with other great Jamaican acts and also received a full-page spread in which they crowned her as "La Nuova Regina Della Dancehall", which translates to "The New Queen of the Dancehall".

"I am not sure if I am deserving of that title as yet, but I am humbled and flattered that someone would think that of me", stated a noticeably excited Tifa when asked about her new title.

Since the Tour has begun, Tifa has already received numerous offers for future bookings, songs and album deals and is currently in negotiations to perform at a concert in Kenya in early December for over 66,000 patrons at the Kasarani Stadium.

Tifa's next stop will be at the Real Beat Higraid Reggae Festival in Czech Republic, where, Tifa will grace the stage as the first female Dancehall act ever to perform in the Czech Republic.

Tifa is still enjoying steady radio rotation for her songs, "Bottom of the Barrel" on the Estrogen Riddim, which is already featured on some of the local dancehall charts, as well as "Can't Stop me" on the Tear Up Jeans riddim.  The Bottom of the Barrel Music Video has already been voted to the #10 spot on Hype TV.

Tifa's European tour began on July 18th and will continue until the 30th of August.  This is is the first major tour for the artist who burst onto the dancehall scene in early 2005.