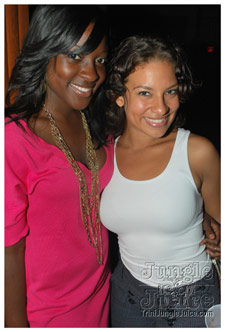 Ahhh yes to Vale or not to Vale?  That should never be a question!  D'Original Diamond Vale Breakfast Party is legendary.  The sophomore year for this event in NY was successful to say the least and can only get better.  Thanks to Wayne, Ralph and the rest.  TJJ had a blast as usual and can't wait for Miami, can you?

CROWD:
Dance Ram!  This event was filled with beautiful people.  It's Labor day weekend in NYC so in addition to familiar faces, out of town folks were also on the scene.  The ladies were working the summer's latest trends and the fellas were on point.

VENUE/ACCESSIBILITY:
Parking in anywhere in Brooklyn is usually a headache and getting a spot at this event was no different.  We walked about two blocks and I am sure that other people trudged even further.  It did not help that fall is in the air and we got the shivers as we made our way to the entrance.

VIBES:
This was our second time attending this event at the library and the energy was even more hyped than last year.
Now because of the extremely high ceilings, the acousticts weren't the best last year.  However, the promoters took heed and had the space outfitted with the appropriate surround sound.  The music was pumping and everyone was jamming as far as your eyes could see. The Duchess Alicia, D'Bandit, Back 2 Basics and Anonymous kept the crowd live.  Winery was in full effect!

FOOD/DRINK:
The line for the food was quite long but moved along with ease with folks eager to chow down.  There was more of a variety that last year and some folks were seen going back for seconds and thirds!  Without question the food was great. Don't you hate getting stuck with chits you forgot to use?  Well I don't think anyone had that problem this year.  That chit line was long for days and the bar was continuously busy even though the cocktail hour was well attended.  The champagne, conac and aged rum served got rave reviews.

SERVICE:
I mentioned the long lline for chits but the turnover at the bar was surprisingly quick. Thanks to Cyllan and the rest of the sexy bar staff, you got served with a smile. :-)  The security was no hassle and super tight.  It's the safest i've felt at an event to date.  And of course Wayne, Ralph and the rest of the Vale Vibe crew continued to ensure everyone's satisfaction.

COST/VALUE:
Fifty big ones!  Yes people $50 and it was not an all-inclusive.  In these guava times that's pretty steep for a fete.  Apparently the promoters had no choice in the price increase.  This was a sold out event though so obviously $50 for a Vale vibe event on Labor Day weekend is worth it!