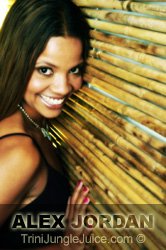 Alex Jordan is 1Xtra BBC's first lady of Soca Music - literally! The UK station has never had a lady at the helm before, and Alex could not be more ready for the challenge. Barbados born Alex was a child model as well as being a keen athlete before music became her focus. As a junior she represented Barbados as a swimmer and golfer, and also did ballet, jazz and tap dancing for 10 years. As a teenage dancer Alex discovered the performance bug and has not looked back since.

TJJ: When was the first moment that you realized you fell in love with Soca?

Alex Jordan: The first time I realised that I fell in love with soca was when I was 12 - the first time I jumped up for Kadooment at home in Barbados. On that day something special happened to me - never before had I experienced such an unparalleled and prolonged feeling of excitement... I thought I was going to lose my mind I was so excited!

TJJ: If Trinidad is seen as the mecca of Soca globally, how has growing up in Barbados influenced your Soca taste?

Alex Jordan: That's a good question... soca music sweet no matter where it comes from, but as a Bajan you know I like to wuk up!! The beat of Bajan Soca traditionally had a more wukupable vibe to it... the years of ringbang soca (Ruk A Tuk Party anyone?) and then Lil' Rick hard wining up the place... there is a certain excitement that a good hard wine tune brings... TnT Soca is a whole other thing. I also love when I hear Bajan Soca artists really keeping it Bajan lyrically on the tracks - there was a period when they made tracks trying to sound like Trinis!

TJJ: From an early age you have always been a performer and if anyone has heard you know they would know your bubbly personality, when was the first time "Soca" called you to perform for "him"?

Alex Jordan: My performing took other forms for a long time, but when I went to McGill University in Montreal, I became VP of Caribbean Students and we had DJ Smokey on the case! I remember having to fight soca's corner on that one, because like most West Indian communities in foreign, dancehall was King! Years later when I first started working for Polydor in London, I've been making it my mission to put soca in front of A&R men... they need to get it to be able to sign it and work it properly. I remember banging on to my boss about Rupee - bringing the album to him etc. - and he liked it but didn't act on it. A year later Atlantic signed him. 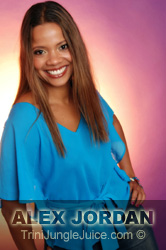 TJJ: What do you seen as the integrating forces between Trinidad and Barbados from a musical sense?

Alex Jordan: Well Trinidad and Barbados already have a marvellous musical relationship (don't mention the flying fish whatever you do...) - we have looked to Trinidad as the Mecca of Soca, but since the Bajan Invasion, have gained some respect from Trinidad - you can hear music from Crop Over at TnT Carnival now. I remember when that was out of the question. Trinidad has been a crucial launching pad for a lot of our artists as well - to an international market... I know Trinis love Rupee like their own... so much so that I have heard him referred to as Trini!

TJJ: When you were studying in Canada, tell us more about the experience of Dr. Jay and seeing Soca in a Global setting from the outside in?

Alex Jordan: Oh Canada... like I said I went to school in Montreal and the only sessions we were feting at over there were the ones we set up, but when I could escape to Toronto... I discovered Dr. Jay. Man oh man... it was such an experience for me because its one thing to hear Soca in foreign, but quite another thing to hear a DJ who could test Caribbean DJs! It was thief head ting! I had my Bajan crew with me and we would leave his fetes wet from sweat, drunk and happy. Thing is - because it was Caribbean music, I thought Dr. Jay would only be known to people like me - only all these years later I realise what a giant that man is...

TJJ: How has Soca music shaped your life?

Alex Jordan: Another good question. Soca has had a great influence, but I never realised that until I was taken out of its natural environment of the Caribbean. Soca music is a celebration of many things - but freedom is a big one (ask Faye Ann!) Living in the UK has shown me that our very nature as Caribbean people is alive with freedom - and Soca music has helped us express it. Many Brits are afraid to dance, sing or "shame" themselves by acting in any way different from their neighbour - Soca music has taught me the freedom of being myself unapologetically in every environment. I can say that categorically.

TJJ: You have had the radio show on 104.1 Yess FM in Barbados, what was your calling to radio? Why did you get into it?

Alex Jordan: From a very small child I had a big voice. People have always commented on it, but it wasn't until I was being offered voice over work, that I started to think about radio. So I was semi-known in radio circles as a youngster. Alan Shepherd from Spice - he rubbed his finger together beside my ear and said that I had "that sound" in my voice. I have always been an ardent communicator and felt that radio/tv would be perfect... to be honest, I also never once contemplated a 9 to 5 (still trying to route that out!)

TJJ: Tell us about being an ambassador to Soca? What are your responsibilities?

Alex Jordan: Ambassador for Soca... wow that scares me, because people like Arrow are ambassadors for Soca! How I get in that one boy? I understand/feel/know Soca music in my own way and hope that my enthusiasm for the music can ignite something. I look at Martin Jay here in the UK - he's an institution and has a name synonymous with the music, and luckily he's been very supportive of me. Its strengthened my back bone when fighting about its merits over hip hop or dancehall - I usually back it up by singing a two line from some fitting soca tune... they capitulate at that stage - if only so I'll shut up! Responsibilities are to stay informed/ahead of everything that happens in the soca world. Luckily I have a team at 1Xtra who are brilliant! 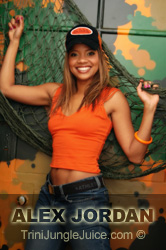 TJJ: First time I did see/hear you, you were face of the Plantation Tropical Spectacular, speaking French and all, tell us about this as a spring board?

Alex Jordan: Plantation Tropical Spectacular... well that show was good to me. Lots of people from all over the world passed through there and gave me cards and advice - that gave me some confidence to consider the idea of leaving Barbados to do broadcasting overseas. Maxi Priest's management offered me a gig off the back of that show...

TJJ: What make you make a decision to move to the UK?

Alex Jordan: Well - my mother is Australian/English so I knew I could legally live and work here and I'd been to University in North America, so I thought I'd give the old motherland a go! I had saved all my money for years and I had decided to spend it on a rail ticket to travel for 3 months across Europe... London was the obvious stop after cavorting across the mainland.

TJJ: What does it feel like to be a woman in such lime light profile in the UK?

Alex Jordan: Lime light? Well - its funny because nothing has changed other than a few more people know my name... it's all good for right now. When I'm big - ask me that again!

TJJ: What do you wake up in the morning and see as the future state of Soca, at least in the UK. Where would you like to take it?

Alex Jordan: Soca music is growing here in the UK. I feel very hopeful for its future... it's a fantastic music and it won't be long before some big rap stars start to use it in their tracks... that's the kind of thing that Soca would need to blow up quick! But I was chatting with Arrow the other day and I realised that this man was on Top Of the Pops - it's the top for music here - and that was 20 years ago! We can get back there... in the UK we're getting producers now too - check out JA Katana's track (Denise Belfon & Macka Diamond "What Girls Like")... it's all good - and now we got the Soca Warriors... oh gosh man! I'd like to influence more people into making it their "specialist" music of choice - it's only ignorance literally - they don't know it - and they will listen to my show and they will know it!

1 Response to "12 Questions with Alex Jordan"