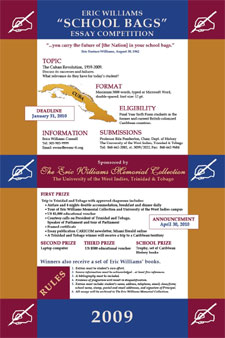 Since 2009 marks the 50th anniversary of the Cuban Revolution, Caribbean students are being asked to assess its successes and failures and to comment on their relevance to today.

This year, the EWMC is partnering with UNESCO offices in Trinidad and Tobago; Jamaica; Guyana; Grenada and the British Virgin Islands in encouraging eligible schools in those countries to participate.

Throughout his life, Dr Eric Williams, noted scholar/historian and the first Prime Minister of Trinidad and Tobago, gave special emphasis to learning.  “To educate is to emancipate,” he famously said, and on August 30, 1962, the eve of his country’s Independence from Britain, he exhorted:
“You, the children, yours is the great responsibility to educate your parents, teach them to live together in harmony…To your tender and loving hands, the future of the Nation is entrusted.  In your innocent hearts, the pride of the Nation is enshrined.  On your scholastic development, the salvation of the Nation is dependent…you carry the future of Trinidad and Tobago in your school bags.”

The contest is being offered to all final year Sixth Form students (or equivalent) in the former and current British-colonized Caribbean countries: Anguilla, Antigua, Bahamas, Barbados, Belize, British Virgin Islands, Cayman Islands, Dominica, Grenada, Guyana, Jamaica, Montserrat, St. Kitts & Nevis, St. Lucia, St. Vincent & the Grenadines, Trinidad and Tobago, and Turks and Caicos. It will be held from September 2009 through January 31, 2010. Winners will be announced on April 30, 2010.

The first prize winner will receive a four-day trip for two to Trinidad and Tobago with airfare, hotel accommodations and two meals daily; a tour of The Eric Williams Memorial Collection and University of the West Indies campus; a US $1000 educational voucher; courtesy calls on the President of Trinidad and Tobago and the Speaker of the House of Representatives; a tour of Parliament; a set of Eric Williams’ books; a framed certificate and a 2010 African American Black History Calendar  In the event of a Trinidad and Tobago winner, a trip to Jamaica will be substituted.

The winning essay will also be published in CARICOM’s Newsletter and the Miami Herald Newspaper’s online edition.

The Eric Williams Memorial Collection constitutes the Research Library, Archives & Museum of Eric Williams.  It was inaugurated by former US Secretary of State Colin Powell in 1998, and named to UNESCO’s prestigious Memory of the World Register in 1999.