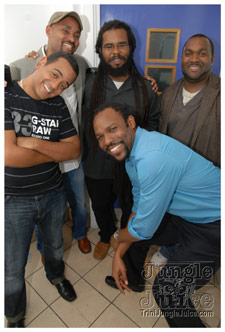 The "Caribbean Film Corner" was the first of it's kind in London, the idea being to the promote West Indian film makers and technicians from all four language groups, be it English, French, Spanish or Dutch speaking, who for the most part still operate mainly in the Caribbean, as well as to promote the entire region as a young, but economically viable region for film development investment. The event was put on and presented by Kalinago Entertainment Limited - an event management and production company based in London with the mission to “Cater Cosmopolitan, Showcase Caribbean” and with some what of a motto: We are Kalinago – “Bringing it All Together”.

CROWD:
A down to earth, charming and passionate about film crowd filled the tabernacle on both nights. However, there were the few anti-social ones we call them "the serious". Some folks coming directly after their nine to five jobs and some who just happen to stroll on by for the event. The auditorium was filled on wednesday night and it was predicted that it would be all due to the film - the power of the vagina - however; on thursday night there were some empty seats ... Not many but a few. The numbers showed Kalinago their support by coming out and expressing their thanks and praises for finally something different and especially promoting and pushing the caribbean culture via film.

VENUE/ACCESSIBILITY:
The tabernacle formerly a house of worship has been transformed into a bar, kitchen, and many rooms or all sorts which can house any sort of event from parties to concerts to press conferences and basically as I said ... Any kind of event ... A small concert? A cooler fete? Hmmm? The Tabernacle is situatied close to Westbourne Park Tube Station and just five minutes walk and you will be dead smack in the "carnival village". It is odd,very odd, for some of us who only step out onto this road for notting hill carnival to actually notice ... Hey! They move the islands ... There is a building here!!! ... Are those peoples' houses!!! The list goes on ... Very easy to get to and without fail night buses and night transportation is not difficult.

VIBES:
There were many films on display on Wednesday night - Day 1 - the two films that mostly stood out were: "El Regreso Way - An immigrant odyssey, it is the story of a woman who left her life in the Dominican Republic in the early 1980's for the south-side of Williamsburg, Brooklyn. Despite difficulty and temptation, she upholds her dignity and her pursuit of the American Dream" ... and ...  "The Power of the Vagina - A documentary that seeks to explore and understand the myths surrounding a woman’s vagina, her sexuality and the perceived power held within. All from a Trinidadian’s perspective. This controversial topic brings to light the issues surrounding a woman’s rights to her own body in today’s society and seeks to answer one question:- Does the VAGINA really have power?" .... Director Jimmel Daniel was flown from Trinidad for this event and following the film was grilled about his film and the history and reasoning behind it with the full disclosure of a follow up film along the lines of the male reproductive organ - The Penis. Thursday Night - Day 2 - saw caribbean music talents John Blood and Z Star perform for the crowd as musical entertainment but the night was really presented as a Director's & Actor's workshop, with multi-award winning director Horace Ove, Award winning actor and 'Eastenders' star Rudolph Walker, and the multi talented Producer and Director of Luti Media, Oladoke 'Luti' Fagbenle; all hosted by BBC Radio's Franka Phillips. A panel was formed with these three icons (so to speak) and a productive Q&A spilled on for almost an hour. After the short break the screening of one of Horace's films took place entitled The Ghost of Hing King Estate.

FOOD & DRINKS:
The tabernacle is a bar and serves food so we definitely had to patronize the bar and its drinks - I am sad to say that I will never advise anybody to eat there - yes your food is excellent and very tasty but my god almighty £12.95 for a beef burger? With cole slaw? Did I just eat designer beef or what!? The drinks were reasonably priced in the range of £3 to £5 and you usual £8 for special cocktails ... But food wise ... No! Thursday being the only day caribbean food was on sale and it did finish - rotis at £5 for one - I took no part but speaking with patrons they say it was worth every pound!! *rounds of applause* ... Thanks to the sponsors who really did "Sponsor"!!!! 10 Cane & Ginger Beer .... it is a school night so let us not ... don't be ... everything in moderation please!!!

SERVICE:
There was some very pleasant bar maids and bar tenders were respectful as well. The sponsors of the event gave some freebies away and that was definately some high brownie points. 10 Cane Rum! Some Grace Juice! Some Grace Coconut water! And a pleasant bar man or two ... Kudos!