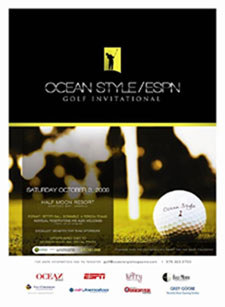 New York, NY, September 23, 2009 – Ocean Style Magazine has teamed with ESPN Caribbean to include a celebrity golf tournament as part of their annual 2009 Fashion Showcase to be held Saturday, October 3rd at the luxurious Half Moon Resort in Montego Bay, Jamaica.  The inaugural OCEAN STYLE/ESPN Golf Invitational will be covered by ESPN Caribbean and will welcome players and celebrities alike from across the region, Europe and the United States.

More than a hundred players and spectators are expected to attend and participate in the tournament, including boxer Lennox Lewis, actor Anthony Anderson, cricketer Jeffrey Dujon and former football (soccer) greats Frank Leboef (France World Cup 1998), Andy Cole (Manchester United and England) and Shaka Hislop (West Ham United and Trinidad and Tobago).  The invitational is a 4-person team Better Ball Scramble that will benefit the Half Moon Foundation.

"We are excited about working with ESPN on the Invitational and are focused on delivering a quality event that is a success for all the stakeholders -- the players, sponsors, ESPN, Ocean Style and KERRY manwomanhome,” said Chie Davis, VP of Broadcast Media for Ocean Style.  “We are also thrilled at the prospect of being able to work in a constructive manner on an event that has the potential to generate such exposure for Jamaica and shines a positive light on the Caribbean. At Ocean Style we like to pride ourselves on showing the 'good life' available in the Caribbean and because this event helps us in that cause, we are delighted to host and have ESPN on board."

“ESPN looks forward to collaborating with Ocean Style magazine on this exciting, new event,” Bernard Stewart, vice president, ESPN Caribbean said.  “The OCEAN STYLE/ESPN Golf Invitational perfectly compliments our commitment to the region and our focus on expanding our business in Jamaica, and the rest of the region, with local, customized events and programming that reflect the taste of Caribbean fans and the business community.”

The Fashion Showcase 2009 and OCEAN STYLE/ESPN Golf Invitational are being hosted in partnership by Ocean Style Magazine and KERRY manwomanhome.

About Ocean Style Magazine:
Ocean Style is the #1 fashion and lifestyle magazine in the Caribbean. Described in some circles as the 'Vogue of the Caribbean' with its avant-garde approach to high end fashion coupled with the very best in the exquisite Caribbean lifestyle, Ocean Style blends the finest in fashion, beauty, food, luxury travel and entertainment with engaging features and profiles of celebrities and personalities to showcase the good life to be had in the Caribbean.  Ocean Style is published six times per year and is distributed throughout the Caribbean, New York, Atlanta, Miami and Washington DC. For more, please visit:   http://www.oceanstylemagazine.com/

About ESPN Caribbean:
ESPN Caribbean is housed within ESPN International, a division of ESPN, Inc., the world’s leading multinational, multimedia sports entertainment company.  ESPN International has grown to include ownership — in whole or in part — of 45 television networks outside of the United States, as well as a variety of brand extension businesses, which allow ESPN to reach fans in over 200 countries and territories. ESPN International business entities include television, radio, print, internet, broadband, wireless, consumer products, and event management. ESPN International and its holdings maintain offices or production facilities in key locations around the world including Bangalore, Beijing, Buenos Aires, Delhi, Dublin, Hong Kong, London, Mexico City, Miami, Montpellier, Mumbai, Paris, São Paulo, Seoul, Shanghai, Singapore, Taiwan, and Toronto. ESPN is 80 percent owned by ABC, Inc., which is an indirect subsidiary of The Walt Disney Company. The Hearst Corporation holds a 20 percent interest in ESPN. The Walt Disney Company, together with its subsidiaries and affiliates, is a leading diversified international family entertainment and media enterprise with four business segments: media networks, parks and resorts, studio entertainment and consumer products.

KERRY manwomanhome is a lifestyle boutique which carries all the necessary accoutrements for the modern individual living in a tropical paradise setting. KERRY embraces ever changing trends in fashion, accessories, home accents, and lifestyle. Specializing in mid to high end products, this style oasis (which is conveniently located in Kingston, and Montego Bay) is ever changing, uber chic, and encompasses true sophistication.