Jah Cure Moving On With The Music 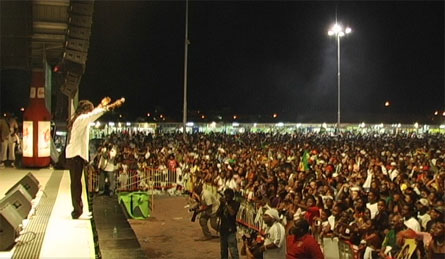 "Not only has Jah Cure been an ever present feature locally but the artiste has also cracked the US market with his recent collaboration with Jason Mraz..."

Wednesday August 16: Kingston, Jamaica: Sobe Entertainment/Danger Zone artiste Jah Cure controlled the charts this summer with his smash hit Call On Me featuring Phyllisia. On that foundation Jah Cure was able to please the thousands to which he performed and was excellent on Sumfest, Beenie Sizzle and several other top flight show in Jamaica and overseas. Not only has Jah Cure been an ever present feature locally but the artiste has also cracked the US market with his recent collaboration with Jason Mraz and ace rapper Lil Wayne on Mraz’s "I’m Yours Remix".

The track has a tropical feel and blends the smooth vocals of Jason Mraz with the beckoning wails of Jah Cure and the platinum rhymes of Lil Wayne. This genius of a hit is presently number one on Power 96 in Florida, beating out Drake and other mainstream international artistes. The track has received over 2 million spins on Jah Cure’s Myspace site. I'm Yours Remix was produced by acclaimed producer Lu Diaz who is known for the Busta Rhymes’ Arab Money Remix and has also done work the DJ Khalid, Rick Ross, Pitbull and Kanye West.

Jah Cure has had a successful summer and now the artiste is set to consolidate the gains he has made both on the local and international scene with his latest video for the song You’ll Never Find. The video directed by Asha Mchail, has been climbing the charts on local cable channels Hype TV and RE TV. With this video Jah Cure is set to dominate the last quarter of 2009.

Asha Mchail believes that the You’ll Never Find video is an excellent follow-up to Call On Me: “I am happy with the turnout and the setting at Jakes in St Elizabeth was excellent. We did some underwater scenes that added a different dimension to the quality of the video. It is a very intimate video and harkens back to a simpler time when life was easier. Jah Cure works hard and always puts 200% into what he’s doing to get the job done; that’s why his work has been of such a high quality”

In the last quarter of this year Jah Cure will return to the Caribbean for a series of shows. Dates are already confirmed for Trinidad, St Vincent, Bahamas and several French Caribbean countries as well as dates in Amsterdam, France and Scandinavia. Already there is a buzz that Jah Cure will be in town and based on last years’ trend these shows will be sold out.

This year has been watershed year for Jah Cure; one in which he maintained his focus and reaffirmed his position as one of Jamaica’s top reggae musicians: “I am really happy with how the year has turned out so far. The fans have been fully behind me and I have worked hard to ensure that the music that I put out is worthy of their praise”. –Danger Zone Music Group/SoBe Entertainment recording artiste Jah Cure.