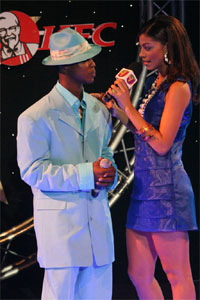 Tuesday, August 12; Kingston, Jamaica: As the new host of Digicel Rising Stars, I am privileged to work with the rising talent of Jamaica. What I love most about being a part of this competition is the chance to bond with the contestants, talking with them and getting to know them a bit more. As the competition progresses and the number of finalists decreases, Jamaica is able to judge the talent a bit more closely.

Of course, the finalists are not the only persons being watched. As the new host, I am aware that many persons have advice and comments and I appreciate the critics. Just like the finalists, I am adjusting and having fun at the same time. I am trying to just let things flow, stay natural, and let my personality run free.

The contestants have also allowed their personalities to run free, and in Sundayʼs (August 10) show, the eight remaining contestants from the publicʼs vote last week joined the Producerʼs pick (Tiffany) to create a passion of R&B hits. The performances generated a sizzling vibe as the contestants sang their hearts out asking Jamaica to make them a part of the lucky eight come Friday.

The finalists are finally listening to the judges and stepping up their game. This week we saw more performances that were powerful enough to please even the judges. Though I can't take any sides and have to remain neutral, here's a quick rundown of what happened this week:

Leisha Rose the Constable, delivered Alicia Keysʼ No One; Cameal celebrated her birthday by being Dangerously in Love, from the album of the same title by Beyonce. Kahlil told the ladies it was All Because of You as well as to come Closer, both from the Ne-Yo collection; Lashana wanted attention with Beyonceʼs Listen; and Wayne agreed with Usherʼs You Got it Bad. SLR harmonized En Vogueʼs Hold On; and KʼAlee did justice to Rihannaʼs Take a Bow. Secret Melodies held back the tears at the end of One Republic and Timberlandsʼ Apologize. All the contestants including the producerʼs pick, Tiffany, were well-received and got thunderous ʽforwardsʼ from the live audience.

All the contestants were wonderful and delivered well. I am especially proud of how all the contestants captured and took a shade of the stage light. The competition is heating up! So remember to keep those votes coming in!