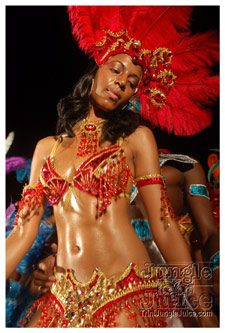 I think this was one of the only carnival mas band launches to show you how it would be on Carnival day. All models were pelting "waste" ... in the right recycle bins!! ... Please Laugh. As a matter of fact, and I know this whole Kanye thing is played out, but I’m 100% serious ... a woman really did say, “Wait the guy in the costume, I’mma let you finish but I’m jumping on the stage to wine on you.” I swear,  a woman jumped up and started wining and jump off, but unlike the VMA's this wasn’t a scene. As a matter of fact, it was all in good fun!!

My only problem was the bar was short staffed and after waiting fifteen (15) minutes for a Smirnoff Ice, it had none! But what you go do?? We take a Stag instead, sat back and continued to enjoy the show.