Jamaica Readys For Digicel Deal Or No Deal 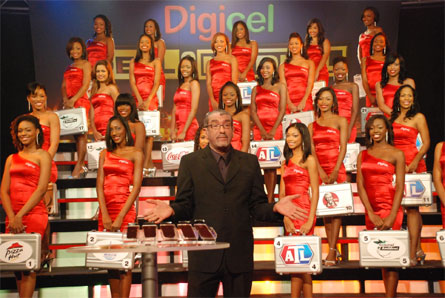 Wednesday September 23; Kingston, Jamaica: The streets have been a-buzz since news that one of the world’s most popular TV shows will premiere on local TV tonight. Digicel Deal or No Deal which was launched in velvet rope fashion at the Fiction Lounge in Kingston last Tuesday will premiere on TVJ at 8pm tonight.

Popular in over 135 countries around the world, from Asia to the Americas, the successful Deal or No Deal format has now been licensed to TVJ through NewComm: the production outfit that has brought Digicel Rising Stars and Magnum Kings and Queens of Dancehall to Jamaican audiences.

The first ever Deal or No Deal premiered on Dutch TV in 2001. The show was tremendously successful and the owners, Endemol, sought to spread this success worldwide. The show then moved to Australia where it again became a hit. Fast forward to 2009 and the Deal or no Deal franchise has popular variations in countries like Argentina, Brazil, Cambodia, Canada,  England,  Germany, India, Japan, Lebanon, Mexico, Nigeria, South Africa and the USA. Deal or No Deal is a true international sensation and tonight Jamaicans will get their chance to see their countrymen deal for big money.

“The secret to the success of the show,” says Deal or No Deal creator Dick de Rijk, “lies in the well-balanced combination of both mathematical elements, such as risk taking, and psychological elements, such as intuition. This unique game structure seems to appeal to everyone, whether it’s presented as a giant prime time show or as a stripped daily edition, like in France or Italy.”

Digicel Deal or No Deal will see series host Simon Crosskill interact with Jamaican contestants as they try to outsmart the antagonistic Banker to go home with a top cash prize. Each week, the game of odds and chance unfolds when a contestant is confronted with 26 Jamaican beauties holding 26 sealed briefcases full of varying amounts of cash – ranging from a measly $1 to a whopping $1 Million. Without knowing the amount in each briefcase, the contestant picks one – his/hers to keep, if he/she chooses – until its unsealing at game's end.

The risk element kicks in when the player must then instinctively eliminate the remaining 25 cases – which are opened and the amount of cash inside revealed. Who's holding the jackpot? Does the player's box contain a stingy sum or an absolute fortune? Nobody knows.  The pressure mounts in each round, after a pre-determined number of cases are opened. As each one is opened, the likelihood of the player having a high value in their own case decreases or increases. Now, an unseen opponent, The Banker, offers the player an amount of money in exchange for his/her case – prompting Simon to ask the all-important question – Deal or No Deal?  Does the player strike a deal with The Banker, or does he keep playing?  The contestant knows that as long as the big cash case hasn't been opened, The Banker's offers will only get higher and higher. As he continues to play, fewer cases will remain and so he will receive even more offers from The Banker.  What if he/she accidentally opens the jackpot case? In that instance, The Banker's offer drops dramatically. But what if the jackpot is in the player's own case? Is the player cool enough to go all the way and find out, or does he/she play it safe and make a deal?

One of the most intriguing characters on Digicel Deal or No Deal is The Banker. The mysterious Banker is never clearly seen on-screen but wields power over the money. His role is to make cash offers to buy the contestant's chosen case rather than allowing them to continue and risk them winning much more. Digicel Blackberry Smartphones are The Banker's choice of communication which he uses to speak to the host. Simon is the only person who will hear what The Banker says and relays this information to the contestant. The Banker believes that he knows more about money matters than anyone else and at times will make disparaging comments about the choices made by the contestants. Digicel Deal or No Deal would not be the same without the all-knowing Banker. His whimsical wisecracks and snippets of wisdom all combine to make his deals ever more tantalizing.

Digicel Deal or No Deal is the ultimate family show which will have viewers on the edge of their seats trying to figure out which case has the one million dollars. Game shows are now incredibly successful worldwide, providing wholesome family friendly entertainment; Jamaica now has its chance to take part is this phenomena. Digicel Deal or No Deal is the first international game show to be made for Jamaican TV by a Jamaican production crew.

"For years Jamaicans have been watching reruns of US and UK game shows and we saw the need to bring quality, locally produced interactive programming to the Jamaican audience. We know that Jamaican's have an eye for quality and will be well pleased with the level of top quality local production that has gone into Digicel Deal or No Deal." - Mike Hogan, NewComm.

Sponsored by Digicel, RIM Blackberry, ATL, Coca Cola, Wata, Ocean Spray Wata, Bigga, KFC, Pizza Hut and General Accident, Digicel Deal or No Deal with Host Simon Crosskill premieres tonight on TVJ at 8PM.  The new game show can be seen every Wednesday at 8PM with repeats on Thursdays at 11:30PM and Mondays at 12noon.

1 Response to "Jamaica Readys For Digicel Deal Or No Deal"