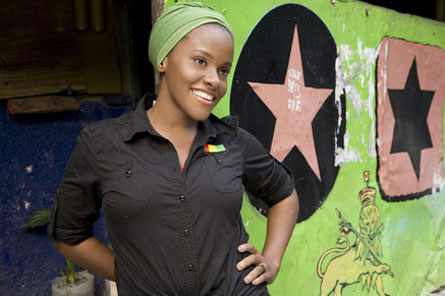 Kingston, Jamaica -- September 27, 2009 -- The ever-so-talented Reggae songstress Etana has made great strides in 2009, affording the world with her soulful brand of Reggae music. Adding to an already impressive year, Etana has been chosen to represent Jamaica at the Johannesburg 2009 Arts Alive Festival in Johannesburg, South Africa.

"We express sincere gratitude and appreciation to Etana for her willingness to represent Jamaica at the Arts Alive Festival," says Sydney Bartley, Principal Director, Culture and Entertainment for Permanent Secretary of South Africa. "Etana continues to stand out as one of Jamaica's outstanding artists and we wish her every blessing in her career."

Etana was just as inspired by this opportunity, stating "I am honored to be chosen as a representative of Jamaica and Reggae music in South Africa."  "This is a chance for me to be there for the people and continue spreading the universal message of Reggae music," Etana added.

In addition to the festival appearances, Etana will also perform in some of the country's clubs, reaching even more of her fans. Although this trip marks Etana's first time in South Africa, it is her third time traveling to Africa. In 2007 and 2008, Etana performed in Gambia and Ghana respectively.  Her groundbreaking song "Roots" was inpsired by an encounter she had with a young boy in Gambia.  Dedicated to uplifting all people through her music, traveling to Africa has greatly influenced her career and movement.

Etana has taken home numerous awards this year. Most recently, she won the "Album of the Year" award at the International Reggae and World Music Awards (IRAWMA) in New York for her debut effort The Strong One (VP Records) and at the Excellence in Music and Entertainment Awards (EMA), among a growing list of accolades.

The soulful songstress also graced the stage of numerous music festivals including Reggae Sumfest, Irie Jamboree and the Soul Beach Music Festival in Aruba, a stint where the artist shared the stage with the likes of Jamie Foxx, Common and Robin Thicke. Clearly, this performance exposed Etana's music to a diverse audience.

Etana's latest single "August Town" is being heralded by fans as a great, thought provoking song.  Like many of Etana's efforts, "August Town" tells of a real-life, recent situation that occurred in her community.  One can expect great things for Etana in the future, as she recently restructured her career, naming Irish and Chin as her exclusive management team and Headline Entertainment as her Booking Agency.