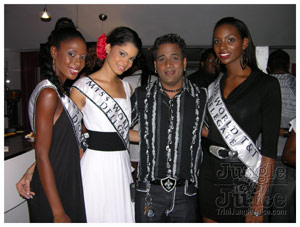 Over the past month the Miss T+T World Delegates have been on a rigorous training regime in preparation for the Miss World T+T Pageant which will be held at the Queens Hall St Ann’s Port of Spain on 28th September 2009.

Having had a chance to mingle with the delegates I would say T+T is in good hands with whomever the judges choose on the day. Franchise Holder of the Miss World pageant Michael Ragunanan, a local designer who operates Michael Vogue Designs and has been in fashion since the age of five expressed that it was a labour of love giving praise to the team of professionals working with him, from the likes of Renne Cummings Broadcaster and President of Miss Trinidad and Tobago New York, Brian Mathews, Fabrice Francois and countless others.

After having no gala show within the last year, also no representative for the Miss Universe pageant Franchise Holder Michael Ragunanan said the public is in for a treat at this show. In attendance will be President George Maxwell Richards. The show will be directed by Renee Cumming and Salem Samuel, entertainment by Laurenzo Gonzalez and many more.  Mr. Ragunanan also mentioned there would be a patriotic custom segment at the beginning of the pageant. Whoever wins the Miss World Trinidad and Tobago Crown will get a substantial amount of the expenses covered by the Ministry of Community Development Culture and Gender Affairs to send them to South Africa in December.