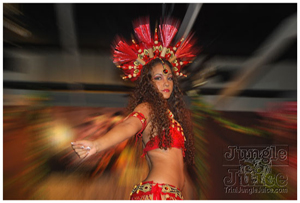 After yuh boy had a great time Down De Islands, I then decided to go to the Pacific Islands for Pulse 8’s 2010 band launch “Aloha!”

It was de first for me visiting the Pacific Island of Aura for a Carnival Event.  I got my Lei as I passed through Immigration at Aura’s front door, but other than that lovely ring of plastic flowers placed around my neck there was little décor-wise that reminded me of the Hawaiian Islands.  And then I realized that just like the other Pacific Islands this event was sparsely populated.  So I quickly made my way to the bar to get all liquored up to prepare me for any other upcoming disappointment.

That night also present a couple of other firsts for me.  It was the first time:
• I went to Aura and did not go to 51o afterwards (unfortunately it was closed)!
• I bought alcohol since de price increased on Budget Day (dam these new prices hot and all ah could now afford is RUM)!
• I saw Pulse 8’s Bandleader up-close and personal since the Poison glory days (and time has not been kind to her at all)!!!

I began to think that this costume presentation cannot go wrong as the very essence of the bikini came for the Pacific.  So at 9pm the lights dimmed, the spot light came on, and there he was Tyrone (everybody’s favorite bouncer) taking up half of the small stage constructed!

And then one by one the costumed models came out ready to get on baddd!  But someone forget to read the memo that if you build a stage in a location with a low ceiling, then you have no head room for those who are wearing elaborate back packs to move effectively.  At least one of the later models realized that she should forget de stage and do she ting on de ground!

The costumes were all the commercially traditional western view of the Pacific Islands as flowered print and straw hats were everywhere!  But then again it’s a fun band and no great thought was required in these designs…  And that being said I’ll leave you to make yuh own review of dem costumes.

But in de end the presentation made a surprising entertaining turn as the Hula Hula Section came on stage!  There’s someting about barefoot gyrls in grass skirts that does it for me! So even with an upbeat ending, and some more love from RUM, I was left still desperately looking for a pulse as I tried to resuscitate this Band Launch.

Keiron was there.... where were you?