By Jonathan Mark©
Published on 11-Oct-09
The DJ's held it down with an all-star lineup of Rapid Response, XTC and High Fidelity Less than Zero. People danced whole night but ...
>> View Chopstix Gallery 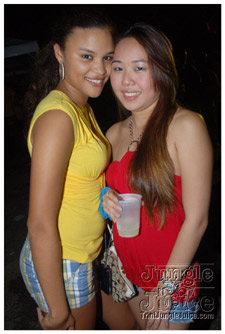 CROWD:
Well it was nice. A good bit of people there but it could have more. They all semmed to make the most out of it though.

SERVICE:
Not bad service. Actually good service... I just didn't like the chit system. It keeps me back from getting my coconut water!

FOOD/DRINK:
It had burgers and I heard a security say it was cutting. So big up to the burger man. It was a cooler fete so for most people you would only buy a cup of ice valued at $3.00TT

VIBES:
The DJ's reach late, so if you really came at 9pm you might have been pissed but we are Trinidadians and our parties start at 12am and Chop Stix did exactly that. At midnight, the party was at full speed... faster than a Mitsubishi Evolution!

VENUE/ACCESSIBILITY:
The party was held at Chinese Association. A fairly easy to find place located on the outskirts of Port of Spain in St. Anns. And although parking was along the road side, there were ample security men patrolling equipped with K9s for that added feeling of comfort.