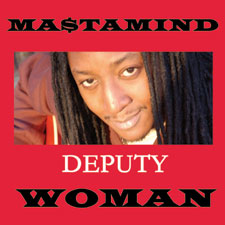 From the beginning of time Man has always sought to outsmart, outwit, and some how pull bobol on his partner, Woman. In every generation they try to come up with reasonable cause and plausible excuses to justify what can only be described as silly behaviour.

Hear now comes Shawn ‘Da Ma$tamind’ Noel, thinking he can pull the wool over the eyes of women everywhere and at the same time help out his fellow bredthren with a song that claims, “A deputy is essential!”

‘Deputy Woman’, is the latest offering from the rising soca star, who is currently one of the frontline singers of Shurwayne Winchester and Y.O.U.

The band Y.O.U, having successfully enjoyed Carnival 2009 with radio hits like You Energy, Make It Yours ft Maxi Priest and of course with Da Ma$tamind singing East Indian style, his popular collaboration, Rum and Roti.

Shawn’s very cheeky follow up this year is sure to stir up emotions and rumor indicates at least one female reply that promptly answers the long time male call to have the freedom to “enjoy” more than one woman at a time.

This line of reasoning is certainly not new to the soca arena, but as we, his audience has come to expect, Ma$tamind puts his own unique spin and flavour upon it. And though the idea is shady, the catchy lines as well as the entrancingly composed music will have the sternest matron dancing and laughing along with him as he performs.