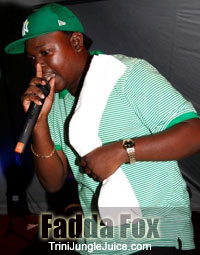 Nicholas Joel Sealy, or Fadda Fox as some may know him grew up in a close knitted community know as Constant Land in the parish of St. George, Barbados. Nicholas was the last born of Ms. Eurene Sealy's children. Nicholas and his three brothers were taught the morals of life which generally related to education and religion. He was a student of the St. George Primary School. It was during his early years at the St. George Primary School that Nicholas alias Fadda Fox realized that he had a love for instruments and music.

At the tender age of 6, he decided to join the school's band and decided it was time enough he learned to play an instrument. Nicholas fell in love with the drums. Being a member of the school band, Nicholas played at every school concert or event that was held, they even took part in NIFCA that year also. He later attended the Louis Lynch Secondary School and found himself in the mist of older boys who were in the habit of setting up the sound system on mornings for prayers and other events.

At about 15 years old, Nicholas started to collaborate with a popular dj known as Lil John. It was then that he learned how to play and mix vinyl on turn tables. For the first, Fox had quite a hard challenge but being the type of person he is, he was very persistent and hard working. It was then he mastered and began to tackle the works of the turn tables. It wasn't too long before he decided to accompany Lil John at various events around the island to experience the life of being an entertainer. Upon graduating from the Louis Lynch Secondary. Lil John later decided to have Nicholas as his accomplice; he would do some early juggling at some of his events. Nicholas soon came to realized he had the capability of being a dj on his own. He took it upon himself to purchase records weekly.

There were three colleagues with this one motive and aspiration in mind. The oldest of the three, Orlando alias "Bakes" had two turn tables, which they started to mix on. On the 20th of November 2000, the three young men decided to form a "sound", now known as DefSquad. The name chosen was of American History, the term 'def' in American slang meant determination. Being a group meant living as one; a family and that's where the word 'squad' took its place. Nicholas started out playing but later decided to be the mc of the sound since he had the voice for it. His love for music has taken him many places to entertain such as Trinidad, Jamaica, St. Lucia, Guyana and some others, along with playing at numerous amounts of shows in Barbados. He later became a member of Barbados' one and only Monstapiece Entertainment Inc. crew, (Monstapiece Federation) where he continues to be the mc along with Peter Coppin.

His latest achievement however, was the release of two songs for the 2009 Crop Over season, "Staggerah" and "Drinks". Where he is being managed under the Monstapiece Inc. Camp, the songs which were produced by Peter Coppin at the Monstapiece Studios have been heavily rotated on airwaves and in the night clubs. Due to popular demand, Fox has performed at several fetes for the season, some of which were, Wet Fete, Berger Boys' 10-10; Wadadah's Back to School Fete, Baje Int'l J'ouvert Party, Brewster's Road 24hr Fete, Power X Four Glow Fete and Cohoblopot. He was also heard and seen on two trucks on Kadooment Day; Baje Int'l and Power X Four where he hyped the crowd, contributing to their enjoyment on the road.

FADDA FOX is managed under the Monstapiece Federation Label.