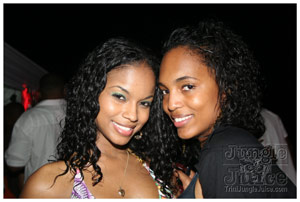 I have to say this is one of the better parties I have been too, and I have been to Frenchmen Carnival parties (Frenchmen "Bazodee" and Frenchmen "Blocko 2009") also, that were also very good.  But, I hear that the Frenchmen New Year's Eve party is the best!

CROWD:
You just can't beat a party on the beach where the women show up in swim suits and beachwear, and it seems like they train for this event because it was only tight abs and sexy legs all over the place! One of the fittest bodies on the night belonged to Olympic 110m hurdle Gold winner Bridgett Foster-Hylton.  This event easily had over 1000 people, but with so much space, you never felt crowded and yet everyone was still close enough to give it a good vibe.

VIBES:
Now here is what really makes a party a party... the vibes, which is a combination of many other factors - and this party had vibes.  For such a huge venue, because they used a lot of space on this beachfront, there was vibes all throughout the party from front to back.  Of couse, the dancefloor was the hub of the action. Rennaisance Disco provided the tunes on the night and they kept the tempo up all night.  They played almost every Michael Jackson song, two extended Soca sessions, nuff pop music and of course... 80s and there was never a lull in the music.

VENUE/ACCESSIBILITY:
Well this was actually a beach party that took place on the beach, but of course, Frenchmen added their personal flair to the location.  The sand on this beach was packed and firm so walking was not a problem, still there was a dancefloor laid down that had to be at least 50x20 feet, and with a bar located right next to the dancefloor you didn't have to go far to lift your spirits.  The bars and food station were located under tents through out the venue and there were even two separate 'huts' for what looked like VIP bars.  Closer to the water's edge, folks who were more laid back could be seen chillaxing on beach chairs and lounges.

FOOD/DRINK:
This was an All Inclusive event and they were bars and food stations from the front to the back of the party.  I mean from you walk thru the gate there was a bar and right next to it there was a food station.  The bars even carried some Appleton V/X and some Johnny.  There were at least 5 food stations, and I was able to sample some angel hair pasta with shrimp, and for my second course I had chicken fried rice.  I even saw some chicken being grilled right on site - fresh and hot!

SERVICE:
Every bar and food station well well staffed and you really didn't have to go to far to find food or drink.  Right to the very end one could find food at one or two station that still were in operation and drinks was flowing all night long.

COST/VALUE:
This event cost about $6500JA (that's about $75US) ... it's not cheap (that means, its not everybody can attened),  and for somebody who does not usually eat at parties or drink that much, I felt like I got my monies worth.  Although admittedly, I did eat at this event because I drank alot!! J