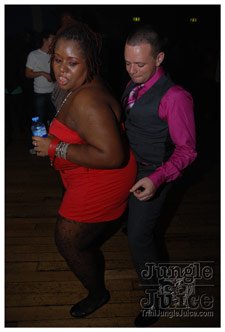 Unlimited Rum... doesn't that say it all ???  Lol... Fresh from Heathrow airport, Posh & Scorn embarking on a mini fete-alotathon aka party chase tonight and Bachanal Mas thank you/ Rum fest all inclusive is the first stop ...

CROWD:
A real mixture! Some Bachanal Mas faithfuls, some on the road patrons who clearly had a blast with this band for Notting Hill 2K9 and some drunken Rumfest visitors who wanted the night to go on and on. Everyone was nicely dressed from sequin pum pum shorts to suited and booted in pink shirt, pink tie and waistcoat. Tonight's crowd was diverse and fun. Bachanal Mas faithfuls are known for their vibes and the somewhat small crowd (or did it just seem that way?) didn't need the rum to have a good time.

VIBES:
Let's not forget this is a SMA award winning band! There was never any question about this party and vibes, they go together like 1919 and coke, white and sprite, Johnny and coconut water! OK so the venue killed it a little to start ... but early on the very sexy B Mas models came out onto the stage in their hot costumes and choreographed dance routines and suddenly the crowd was in the centre and alive! The costume presentation was very well put together and would appeal to both Caribbean and non Caribbean patrons. In fact there was whispers around the dance from the non Caribbean fans about how they gonna get a costume for next year! OK so back to vibes... sorry! We could sum this up easy... men hold their head and wine, eyes closed! the King of B Mas was jamming people up against the stage with a leg in the air....we see man wining on man, woman wining on woman ... It was like find a bumcee, any bumcee! Our special favourite for the night was the very entertaining 3 fellas in the middle of the dance floor who didn't stop dancing ... we even get some break dancing moves or at least some drunken attempts at break dancing!! Vibes Vibes Vibes ... this band put the B in Bachanal and we love it!!!

VENUE/ACCESSIBILITY:
We gotta say ... having been to a few fetes in The Camden Centre now, that this venue is not on team TJJs favourite list for London. It's big, it's easy to get to (across the street from Kings Cross tube ) but it's like one big square with a big stage, one big bar and LOTS AND LOTS of space. The result being that most people stick to the edges and you get that kind of school dance vibe. Tonight had people but somehow the venue made it seem empty and therefore even this usually 'full of vibes' bunch took a while to get going. New venue next time please B Mas!

FOOD/DRINK:
We already said that there was one long bar and at times there was a small wait for drinks but what kind of all inclusive doesn't have a jam packed bar so hey no loss here! The bar staff were friendly and efficient and certainly knew their stuff when it came to the important stuff ... RUM ! Whether you were a rum connoisseur or a mere beginner... the bartenders pointed out different flavours and had plenty of the regular stuff. They were happy to give out several shots of all kinda rum all at once! We get a Kinda of vanilla flavour something and some apple flavoured stuff too ... so sweet you forget is alcohol! Careful! Bar staff you were on point, thank you! Now there was food in the back but with the party chasing on our mind we have to give our apologies we can't even pretend to know how it taste!!! However we know that they were asking for yuh ticket/ food slip or something as you went so you couldn't go back for food more than once ... hmmm, so not great for those who came to fill their bellies ... This was purely an alcoholic affair !!!

COST/VALUE:
The jury is out on this one... and it's kind of simple why? £25 got you entry, unlimited rum and some food to eat. Now if ya a rum drinker this was an absolute steal of a deal in our opinion ... you cyah go wrong! The alcoholics in the dance sure felt that they got their money's worth. For those who weren't big rum drinkers or in fact rum drinkers at all there were a few grumbles about price. However we gotta say the clue was in the title ... 'RUMFEST' ... so kinda says if ya not into rum maybe this wasn't for you and if you decided to spend yuh money and come anyway ... DOH COMPLAIN!! ... empty barrell hush yuh .... !!

Something about this band has really caught us ever since we bounce them up in 2008 ... and we gotta say it's the pleasant people, the consistency, the fresh and the pure vibes they bring time after time!

Bachanal Mas we love yuh like the first time yuh hop on the good foot and do the bad thing .... and we cant wait for Notting Hill 2010 (Scorn coming for SURE this year!!!)

First fete in the challenge done.. where to next ???

Elizabeth aka Posh Juice...in recovery
The only thing constant is change.
(Scorn Juice contributed to this review)