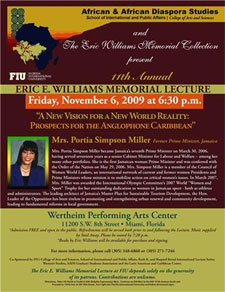 Former Jamaican Prime Minister and current Leader of the Opposition Mrs. Portia Simpson Miller will be the featured speaker at the Wertheim Performing Arts Center, Modesto A. Maidique campus, 11200 Southwest Eighth Street, Miami, Florida. Admission is free and open to the public.

Mrs. Portia Simpson Miller became Jamaica’s first woman Prime Minister on March 30, 2006, having served seventeen years as a senior Cabinet Minister for Labor and Welfare – among her many other portfolios.  She was conferred with the “Order of the Nation” on May 29, 2006.  Mrs. Simpson Miller is a member of the Council of Women World Leaders, an international network of current and former women Presidents and Prime Ministers whose mission is to mobilize action on critical women’s issues.  In March 2007, she was awarded the International Olympic Committee’s World “Women and Sport” Trophy for her outstanding dedication to women in Jamaican sport – both as athletes and administrators.  The leading architect of Jamaica’s Master Plan for Sustainable Tourism Development, Mrs. Simpson Miller has been tireless in promoting and strengthening urban renewal and community development, leading to fundamental reforms in local government.
FIU Eric Williams Lecture  page 2

Established in 1999, the Lecture honors the distinguished Caribbean statesman Eric E. Williams, first Prime Minister of Trinidad and Tobago and head of government for a quarter of a
century until his death in 1981.  He led the country to Independence from Britain in 1962 and onto Republicanism in 1976. A consummate academic and historian, and author of several books, Dr. Williams is best known for his groundbreaking work, the 65-year-old Capitalism and Slavery, which has been translated into seven languages, including Russian, Chinese, Japanese and soon-to-be, Korean. Urdu and Hindi editions are also planned.  Popularly referred to as The Williams Thesis, this landmark text continues to inform today's ongoing debate and remains “years ahead of its time…this profound critique is still the foundation for studies of imperialism and economic development,” according to the New York Times.

The Lecture is also supported by The Eric Williams Memorial Collection at the University of the West Indies (Trinidad and Tobago campus),
which was inaugurated by former U.S. Secretary of State, Colin L. Powell in 1998.  It was named to UNESCO’s prestigious Memory of the
World Register in 1999.

Books by Eric Williams will be available for purchase and signing at the Lecture.
For more information, please contact 305-348-6860/271-7246 or africana@fiu.edu.