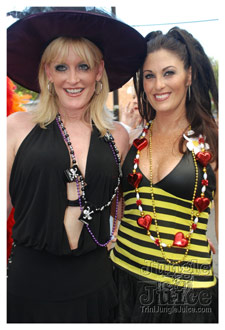 Fantasy Fest reminds us of good ole New Orleans' Mardi Gras a little, except you don't have to giveaway or exchange beads to see some nudity! You see it all (and some). This event has escalated to a ten day celebration that includes a parade, tons of parties (Pajama and Lingerie, Pimp and Ho), balls (Headdress Ball, Monster's Ball), costume competitions, body painting, drag queen contests, lots of drinking, as well as pet and neighborhood parades for the whole family (yes, we did see kids). Although we have been doing the one day Bus Ride from Miami (Saturday), everyone recommends making it a long weekend (Thursday to Sunday), and claims that both Thursday and Friday night activities will not disappoint.

CROWD:
Bus Ride: The crowd on the bus was full of familiar faces, not celebrities per se, but more of the West Indian regulars for outdoor events such as Fantasy Fest, most of whom were returning for their 2nd or 3rd bus ride. There was a party atmosphere, even before the buses arrived as old and new friends reconnected in the early hours of saturday morning.

Key West: The crowd in the Keys was a melting pot of Floridians from the very young to the very old and all in between. Most were in costume, some very elaborate store bought, some home-made, and others were completely made out of paint (body painting is a big hit). Whilst most of the younger folks played it safe, the older (young at heart) one's were more daring. We had to do a double take at times!

VENUE/ACCESSIBILITY:
Bus Ride: The meeting place for the bus was easy to find, just off the highway and clearly marked it was an ideal location for an early morning rendezvous with a fete bus. The music and drinks on the bus were both flowing, breakfast was served and off we went.

Key West: This place is ideal for small to medium sized street parties, with bars and restaurants on every street, the low building and tropical feel allow for a slight breeze which kept an otherwise uncomforatble day at bay. The crowd was laid back, slightly older in the early afternoon, but grew louder and more excited as the parade began.

VIBES:
Bus Ride: The DJ on the bus did a great job all day and seemed to love what he was doing so much he decided to play music on the way back to Miami at two in the morning. He was new to the bus and had trouble understanding that we had had enough. His music was good though.

Key West: The bands and bars all had music, all of which catered to their respective crowds, it was all geared towards a good time and it seemed that a good time was had by all. It became a great time when we found truck #17 after searching through various streets and cutting in and out of the route. We discovered the mysterious soca truck #17 .... dat is when the winery started!!! ;-)

FOOD/DRINK:
Bus Ride: The bus was All Inclusive, which included premium drinks on board (there was no Guinness ... we were not amused ... rectified that after the first pit stop), breakfast was a choice of tuna, chicken or corned beef sandwhiches. The tuna was very good ... lunch was served upon arrival in Key West and included, rice, curry chicken, stew chicken and some side salad.

Key West: There were drinks and food everywhere!! We managed to find a local who had caught a cooler full of fresh fish and was grilling it to order in the park next to the bus. It was excellent, one of the crew had two snappers throughout the course of the day.

SERVICE:
The level of service was satisfactory for this kind of event. The promoters were on the bus and easily available to answer any questions and address any concerns.

COST/VALUE:
Living in Miami - we each paid - $65 round trip for the Bus Ride. Considering tolls, gas, drinks, food, music and wine ... this is one of the most cost effective events we have been to for the year. The actual Fantasy Fest Parade is absolutely FREE. However, if you drove (and don't have a parking hook up), be prepared to fork out $40 for parking alone!!

We would personally like to thank Michelle and her staff for making our second Fantasy Fest as enjoyable as the first. We look forward to partying with you guys in the future.