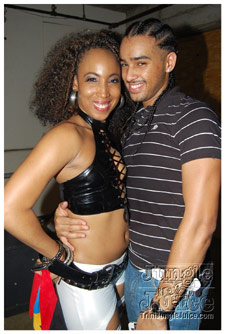 If it wasn't for the AC set back, this event had great potential.  Additionally ... some people did not let the heat stop them from enjoying themselves and having a time.

CROWD:
This was a big venue, and it's good thing too because they pull a nice big crowd! Luckily Mahi Temple was spacious enough to that the crowd were not packed in too tight.. everyone had enough space to jam and wine. The crowd was probably a lil' more sophisticated and mature than some of the other fetes so far, but it had a really nice mixture of people - young to old. We see some sexy outfits, some beachy outfits and some flag superheros come out wrapped in all their patriotic glory to show us their Caribbean pride. Some of the best eye candy in Miami so far... so this is where the girls and guys have been hiding (even the bar staff ) ... WE LOVE IT!!

VIBES:
Don't mind the temperature up in there, some folks was getting on real bad.... dancing, jumping, waving and wining down de place! Bajan Soca Queen Alison Hinds gave a fantastic performance.  Denise "Saucy Wow" Belfon is meh girl, she could real roll she waist ah tell ya! Machel Montano slip and fall coming on stage, but recovered gracefully, and gave an outstanding performance.

VENUE/ACCESSIBILITY:
The venue itself was large enough for everybody to dance and get on bad, BUT de place was too HOT! There was no AC (air conditioning) up in there!! According to sources, the AC broke down. Lawd!   And to make matters worse, no re-entry. So for the folks who needed air and was on the verge of passing out, if you left to go outside you couldn't get back inside. Madness!!  It was an oven in there.  Even Machel commented how hot it was!

FOOD/DRINK:
A Chit system.... steupzzz!! But the bars were large enough for the crowd, so I didn't have to wait long to get a drink. And the prices for drinks were reasonable. Ah notice some people bought bottles which worked out great if yuh had a large crew.

SERVICE
The service was fine, definitely room for improvement. When I went inside the bathroom, the air was thick inside of there (ah couldn't breathe, thought I was in Denver), all the mirrors were fogged up because of the heat. I don't mean to be blunt, but hopefully my comments will be viewed positively in order to improve on future events, and allow for some kind of back up plan in cases like these.

COST/VALUE:
Promoters... let's not forget that it's all about the people and hosting a large event like this. Partygoers fun, comfort & happiness should be #1 on your list! Some people had to leave early because they could not stand the heat... and this is after they paid full price to get in. A simple solution would have been to establish a re-entry system.