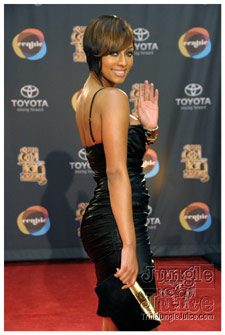 On Wednesday November 3rd, 2009 TriniJungleJuice.com had the privilege of covering the 2009 Soul Train Awards presented by Centric and the Black Entertainment Television (BET). Soul Train, a back in the day Saturday morning musical program honoring the best in the musical art-form, was hosted by then popular black TV personality and star, Don Cornelius. Soul Train, aired in the mid-1980's, was the forum for big name musical entertainers, such as the now deceased Michael Jackson and others to have their voices heard as well as a stage for the teenagers and or mid twenties music lover(s) to learn a few dance moves or two.  The award show will also honour Michael Jackson, who by the way, holds the most Soul Train Awards to date. Jackson was awarded with the Entertainer of the Year Award. Today, though not aired any more, Soul Train has held its place as an integral part of the development of the Rap, Hip-Hop and Rhythm & Blues (R&B) world as we know it in 2009 and BET is keeping its dream alive.

Held at the Georgia World Congress Centre (GWCC), the 2009 Soul Train Awards was attended with the likes of a few big name stars, some of whom represented both the music and film industry. In attendance on the red carpet, the TriniJungleJuice team captured photos of Academy Award nominated actors Terrence Howard and Taraji P. Henson, R&B's new sensation Keri Hilson and one of the night's major honorees in Charlie Wilson.  Also walking the Red Carpet was Gramps and Una Morgan of Morgan Heritage. (look out for a 5 Mins With ... both Gramps and Una coming soon)

This year, in representation of the Caribbean, BET included a Best Reggae Artist Award in their list of categories, which also included Best New Artist, Best New R&B/Soul Artist Female, Best R&B /Soul Artist Male, Song of the Year and Album of the Year etc. Jamaican Reggae star Sean Paul, walked away with the Best Reggae Artist Award. He competed against the likes of Serani, Movado, Taurus Riley and Ziggy Marley.

At the event, an all star cast was lined up to perform including Toni Braxton, Trey Songz, Ryan Leslie, Angie Stone and Johnny Gill just to name a few. The Award show will air on November 29th 2009 at 9pm on BET as well as their new spin off channel Centric. Until then, TriniJungleJuice is happy to bring you coverage. The Red Carpet closed promptly at 8pm, in time for the taping of the award presentation and live performances.

As the evening came to a close for our media outlet, we were happy to have had the opportunity to bring this experience to our loyal fans and viewers. TriniJungleJuice  would also like to give thanks to Crystal Thomas and her staff at BET. Thanks also goes out to Michale Thomas of Caribbean Media Network and Jason Walker of WRFG in Atlanta for your support of TriniJungleJuice.com. Look out for us again at the 2010 BET Soul Train Awards.