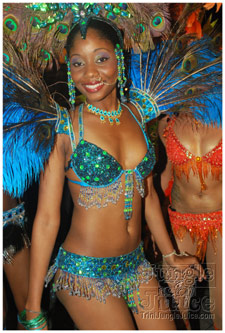 CROWD:
There was a mid sized gathering at Crobar here to part take in Legacy's media launch of the event themed "LEGACY, WIN, MASALA for 2010." The crowd as such mostly consisted of girls in costumes, promoters, soca artist, Win Tv staff and Legacy Mas youth based group.

VENUE/ACCESSIBILITY:
We were on the Avenue at Crobar. A place located in the heart of the action when it comes to weekend nightlife. So as we all know, where there is plenty people ... there are going to be loads of cars and parking can be some what be difficult.

VIBES:
There was a sort of band launching atmosphere here tonight, as sexy models paraded up and down in full costume during most of the night's course. A presentation also took place explaining to all what tonight was about, so in turn the night's activities also followed a formal routine at times.

FOOD/DRINK:
Drinks were the standard stuff that you could get at Crobar on any given night. There was some tea plates given out to all guest closer to the end of the event however, consisting of some east indian finger foods.

SERVICE:
The promoters did their best to facilitate their guests and ensure that things went smoothly.

COST/VALUE:
No cost were involved tonight. It was a media event for specially invited guests to part take in.