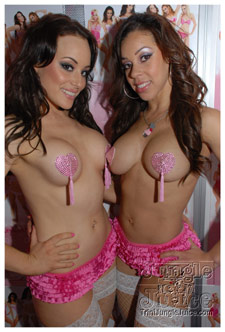 Imagine a slim girl no taller than around 5'2, looking you dead in the eye whilst doing the splits upside down on a pole in 6 inch heels and holding on with just one arm!!!! This is what Erotica 2009 is all about: the outrageous, the fabulous, the amazing, the enticing and exciting...all set in the World's largest exhibition for freethinking adults right here in West London.

Set over three (3) days, Erotica promises to excite, tease and explore your fantasies with exhibitions, shows, music, style, art and massage! Team TJJ intend to fully explore the world of Erotica and therefore are going to be sure to attend and document all three (3) days with great pleasure! Entrance is set at £25 and definitely worth it! You get to mingle with honest, down to earth and open minded people all out for a good time and  to explore, let go and be enticed. Also the performances that Erotica bring are surely worth the entrance fee alone!

Now in it's twelfth year, Erotica is set at Olympia in Kensington. You couldn't ask for an easier venue to get too as this huge exhibition hall has pretty much it's own tube station right opposite the venue. On entering the hall, a little after 6pm in the evening (the event started at 12pm) we were slightly surprised to see how mellow and relaxed the vibe was. People were generally milling round, getting food, exploring and shopping for new sex toys ! There was an air of freedom about the whole exhibition and a quick walk around the venue showed us that there was a lot more than shopping going on! This was an 'anything goes' exhibition. Feel free to pull out the fetish gear and the nipple tassels, the latex and the bondage tape and if you came unprepared, fear not as there were demos and exhibitors more than ready to give you a helping hand.

To the back of the venue was the main stage, which had a large seating area to take in the scheduled performances and where you could also grab a drink from either the 'Temptation' or the 'Roar' bar that sat on either side of the main stage. There were 4 scheduled performances, so you wouldn't miss out whatever time you could make it to the show, and let us just say wouldn't want to miss out on this!!!!!! WOW! This year's headline act was 'THE FUEL GIRLS' , yeah that's right all in capital letters because trust us they deserve to be!! We are talking fire breathing, stiletto wearing, rock and roll pole dancing and kick ass stunts !!! The pictures speak for themselves but let us say nothing makes up for seeing these girls in action! There were some amazing stunts including hanging upside down from ropes and poles, breathing fire, covering themselves in champagne whilst crawling across the floor, doing the splits, dancing and exciting the crowd. They say pole dancing is one of the best forms of exercise and yes The Fuel girls have the bodies to prove that theory !!! They were joined on stage by 'The Amazing Ari' and 'Roxy Velvet' dangling from the ceiling with two rings, Burlesque favourite: 'Kitty Bang Bang', two sexy female vampires, a very sexy Popeye the sailor man performed by 'The Amazing Ari', a sexy vixen who breathed fire whilst dancing in and out of a tub filled with glass (owe!) and the beautiful 'Empress Stah' performing some amazing tricks on the ropes that hung from the venue ceiling wearing not much more than nipple tassels and underwear!!

Let us just say that on first impressions team TJJ had a thoroughly enjoyable and eye opening experience on our first trip to Erotica, but we coming back for two more days still, with lots more to take in, especially The Fantasy Boys ladies... until tomorrow !!

It's day 2 and we back in Olympia because we can't get enough of Erotica 2009! Today the plan is to catch the Fantasy boys and take in more of the Exhibition including the new Swingers Zone and the Fetish Area. The hall today is set up pretty much exactly as it was yesterday and again there are 4 more shows on the main stage at 2 hour intervals for you to take in at your leisure! For the life of us we can't find where the Fantasy boys are! By the time we reach the London Room the queue to see these Fantasy boys was huge and they stop letting people inside! So I guess it's all about the Ladies again today! Today the venue was a much more packed out with people, we guess Saturday being the more popular choice for most. All the stars from the main shows and the Porn stars were mingling in the main crowd and promoting their material, including handing out free DVDs. We had plenty of time today to explore details of websites where we could buy all the gear you could imagine and also talk to promoters about Fantasy and fetish parties. Apparently London has a very active Erotic scene and this exhibition is just a sneak peak. Take your time looking around the corsets and dresses to give you that edge and the latex and bondage tape to work him up in a sweat! We even found some Marujana inspired and flavoured condoms! Genius! Lastly, we couldn't help but take in the main show again, having been totally captivated by The Fuel Girls and the amazing Princess of the Pole!

Mission Fantasy Boys! We leaving the house today on a mission to catch these Fantasy boys in action and see what the huge queue was all about! Fantasy boys also have several shows on each day of the exhibition at 2 hour intervals but they in demand! Ladies, they are in demand for a reason! At a little after 3pm it's strip tease man style! We were treated to Marco the 'Italian Stallion', 'Big Ben' and Tom we forgive you for throwing your pants into the crowd and over the TJJ cam! It just made the experience even better! Ladies were screaming as the boys went from long black cloaks to tiny hot pants with a hint of a thong underneath! There are no words to describe how great a show this was, the boys kept it clean and fun and purely entertaining, coming out into the audience and teasing all the fans. It's hard to describe the atmosphere that the performance creates with pyrotechnics, strobes and tan lines galore! Let us just say that we hear Riot police might be need to contain the female hysteria! The crowd watching the show were male and female, young and old, which pretty much summed up the event for us: Free, open minded and something for everyone. Right, so mission fantasy boys complete and worth every minute! Just as TJJ were about to call Erotica 2009 a day, the music from the main stage came blaring over the speakers as the main show began again! We just couldn't resist another peak at Empress Stah, Tracey 'Princess of the pole' (a slim girl no taller than around 5'2, looking you dead in the eye whilst doing the splits upside down on a pole in 6 inch heels and holding on with just one arm!!!) and THE FUEL GIRLS...OK so just one more look!

Erotica 2009 was an amazing experience from start to finish and the dates are out for next year already so we suggest if you have an open mind, a sense of curiosity and enjoy some eye opening entertainment, this is THE EVENT not to miss!

We have next year's dates in the diary already, see you then!!!

Elizabeth aka Posh Juice the Latex Queen!
"The only thing constant is change"