I Know I Must Work Hard For Wickets Says Kemar Roach 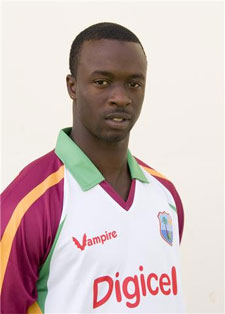 Tuesday, November 24th 2009 – Brisbane, Australia: Rookie West Indian fast bowler, Kemar Roach, says that, despite Australia’s reputation as a favoured destination for fast bowlers, he knows he must work hard for his wickets.

“This is my first time in Australia and before coming here I was told that it would be hard work. This is what international cricket is all about - hard days and long days,” the 21 year-old Roach told DigicelCricket.com after his first full day of bowling Down Under.

Roach finished the second day of the Windies four day warm up match against the Queensland Bulls with 1 for 67 from 23 overs as the home side made 384 for 4 in response to the Windies’ 271 all out on day one. He was the most impressive of the bowlers on display.

“I know I have to work hard to get wickets and I’ll bowl all day if I have to,” said the pacer who sent down the most overs in the innings thus far.

“I know I will have to remain consistent and patient and stick to good areas and not get frustrated,” Roach surmised after his outing at the Allan Border Field.

Two of the Bulls batsmen – Nick Kruger (172) and Wade Townsend (100) – registered hundreds against the Windies but they benefited from a few dropped catches and numerous close shaves, particularly from Roach’s bowling. Both of the centurions had a tough time against Roach who, by some distance and despite his relatively short stature, is the fastest bowler on show in the match.

Roach said that he will rely on inspiration from his favourite bowlers to execute his role with precision.

“My favourite bowlers were (Curtley) Ambrose, (Courtney) Walsh and my idol is (Corey) Collymore. What they all had in common was the ability to bowl in good areas and make life difficult for batsmen - so that’s my aim,” the exciting fast bowler explained.

Kruger believes that Roach possesses deceptive pace and, despite being hit on the helmet, felt that Roach was holding back ahead of the First Test against Australia at the Gabba.

“He just ambles in but then it is on you, he is quick and he got me with a good one - I have got a bit of a headache," the 26 year-old left hander said of Roach who has featured in two Test matches, seven One Day Internationals and a couple of Twenty20s for the West Indies.

“"They came hard at us but we batted pretty well. It was my day. I had a couple of chances and they were probably recovering from a bit of jet-lag," Kruger reasoned.

Visit www.digicelcricket.com to get all the latest news, pictures and player blogs right throughout the Away Series in Australia.

After eight years of operation, Digicel has 8.6 million customers across its Caribbean and Central American markets and is renowned for competitive rates, unbeatable coverage, superior customer care, a wide variety of products and services and state-of-the-art handsets. By offering innovative wireless services and community support, Digicel has become a leading brand in the Caribbean and has placed the region at the cutting-edge of wireless communications – the company is also a recent entrant to the Central American and Pacific markets.

In total, across its 32 markets, Digicel has over ten million subscribers.