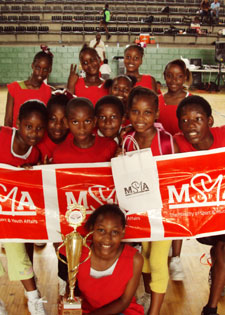 Primary school students in the Port of Spain area are now actively engaged in the technical and fun aspects of jump rope thanks to the Ministry of Sport and Youth Affairs (MSYA). The series of activities which included workshops for Physical Education teachers about how to introduce the sport to their charges, demonstrations by ‘professional’ jump ropers TnT Blingerz and an inter-school competition for students.

The Jump Off competition, which took place recently at the Jean Pierre Complex featured more than 15 schools and over 1000 students – boys and girls. The half-day activity saw the students completing a circuit of skill tests. The school that successfully executed the challenges within the prescribed timeframe won prizes courtesy the MSYA. Chinapoo Government School emerged the overall winner.

Similar events are planned for other districts in Trinidad, as well as a larger competition where students will be able to display jump rope routines that they have developed themselves. The ultimate objective of the project is to introduce competitive jump rope as a recognised sport. ‘Learning D Ropes’ was supported by the Ministry of Education, the Port of Spain Sport Council and TnT Rope Blingerz. 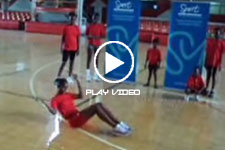