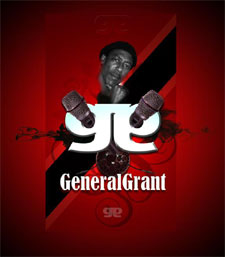 Sheldon $hel $hok Benjamin who sadly passed away this June 09, left his 2k10 contributions behind. Curtis “General” Grant, the last male artist to be produced by Mr. $hok is on top of his game for 2k10 with a bumper groovy soca called “To the World”, exactly where both $hok and Grant vowed to take the music from the beginning of their union in the early 90’s under the Keskidee Karavan headed by veteran, Robert Amar.

Curtis “General” Grant has already collaborated with Farmer Nappy from the HD camp and will be performing alongside Farmer Nappy for 2k10 with “Looking to Wine”. Another release called “Drink” on Daryl Braxton’s “Stush Riddim” along with “Waistline Season” on Andy Joseph’s riddim are a few more of General Grant’s releases to come.

For more information on the General, join his fan page on Facebook... Curtis “General” Grant or myspace www.myspace.com/trinigeneralgrant