An Indian Experience Makes All The Difference For Tony P 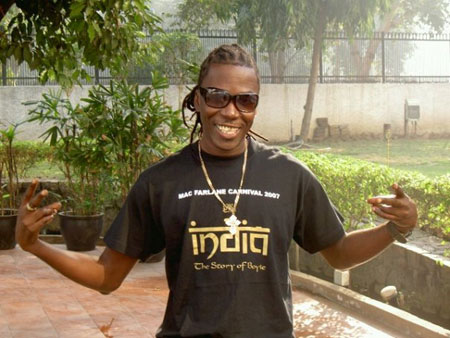 POS, Trinidad- A trip to India has given him a newfound sense of appreciation for the things many take for granted in Trinidad and Tobago. Tony Prescott’s trip to the poverty- struck sub-continent, as part of the cultural contingent who journeyed for the 40th anniversary celebration of the T&T High Commission in India in November, was an eye-opener- one that he’ll never forget.

Prescott, a household name in the Caribbean- says the trip has given him a different outlook on life. “It was heartbreaking seeing people living in extreme poverty,” he said. With that sight and memory embedded in his mind- Prescott is vowing to strive for just what he wants- soca success!

“In T&T, we have freedom, will and opportunities but we sometimes take it all for granted.”

He said walking along the streets of Dheli, Jaipur, Bombay and many of the group’s other stops, the T&T visitors were met with great appreciation, especially when they associated the world’s cricketing hero, Brian Lara, with his homeland- Trinidad and Tobago. “ Despite everything, the hospitality and service we received was incomparable,” says Tony, adding that the people- from the police officers at the airport who conducted the necessary security searches to the regular man on the street, embraced their Trinbagonian visitors.

Now, back from the Indian experience, Tony Prescott’s not about to rest easy. When he returned, his Lollipop Promotion outfit hosted its annual Treasure Queen party cruise. With a packed ship- all Tony could do was smile- after all, friends, fans and soca lovers were ‘All Aboard.’

With two C2K10 hits on rotation and the seed of thought for a rejuvenated commitment to acquiring his dream, Prescott’s hopping a plane to Orlando in early December. This time though, he’s on a Christmas mission to uplift the spirits of the West Indian community in that part of the world. Then, on Boxing Night, the Ocean Pearl in Chaguaramas will be all his for an event that many look forward to each year.

Tony Prescott’s course isn’t mapped out but his spirit propels him onward- in an upward direction. In his mind, he understands the purpose of India and now more than ever he’s determined to take Soca to the extreme.

ABOUT TONY PRESCOTT:
Tony Prescott is a soca and calypso entertainer from the island of Trinidad and Tobago. His music spans a decade with hits that range from, All Aboard to Follow Me, Together As One, Surrender and Genie among others. As lead singer and shareholder in the band Surface- Prescott has over the years, maintained his appeal as an entertainer. His vocal ability coupled with a vision to take the music beyond the Caribbean, has kept him in high demand across the region throughout the years. His positive attributes have also led to notable attention being paid by Trinidad and Tobago’s cultural bodies within recent times.