Naki is "Always On Time" 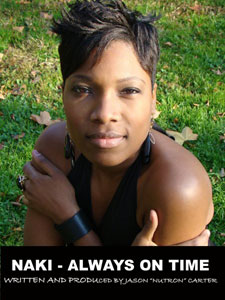 Singer and Songwriter Naki, is definitely busy this season, after releasing two wonderful Christmas songs she is now ready to deal with Carnival 2010.

Her offering is a very sexy and steamy crossover groovy soca number entitled “Always On Time.” Written and produced by Jason “Nutron” Carter ( co-writer, co-producer, Machel Montano’s Make Love and Ramajay”) describes a woman that can call on her man at anytime because she is truly satisfied, as the song says “whenever I want it, he’s always on time”. We are not sure who the lucky guy is, but one thing is for certain Naki’s delivery on that number is definitely one that will satisfy her audience and leave them wanting more.

Naki’s musical background started in Calypso, where she still competes in the Toronto’s Kaiso 365 Calypso Monarch every year, and apparently she is very good at it as she has made it to the finals for the past 3 years. She has been singing since she was 13 years old and she’s grown into a versatile songstress as she releases a soca parang every Christmas, dabbles in some R&B but states “Soca and Calypso is My first love”.

She is currently working on her first album scheduled for release by summer 2010.

For more on Naki Please visit: http://www.facebook.com/pages/NAKI/58337359085?ref=ts or email at: nakimanagement@gmail.com