By TJJ Admin
Published on 27-Nov-09
Like with true west indian style this crowd wasn't present until well after 12am. Like I walk in and thought I was ...
>> View Caribbean RETRO Gallery 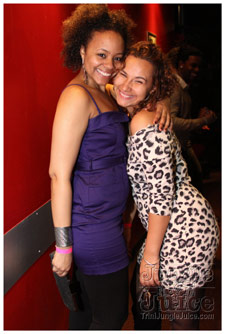 CROWD:
Like with true west indian style this crowd wasn't present until well after 12am. Like I walk in and thought I was at the wrong place, but i guess i just reach too early (how eager of me). Even-though I wouldn't say this party was jam packed it definitely had people but the majority of the crowd came in after 12am and it was filled with new faces all ready to fete.

VENUE/ACCESSIBILITY:
Retro was held at the Zanzibar on the Waterfront. Even-though it isn't my favorites of places to party on a Friday night I have to say that the promoters definitely took the extra effort to decorate the place, snazzed it up a little. It definitely gave it a personal touch.

VIBES:
The energy at Retro was definitely divided. At times people was getting on rehl bad then at times you would see some sitting down (i dont know if it was to catch their breath) but the vibes was good but definitely could of been a little better. Even-thought we were promised a live reggae artist I didn't see one, or maybe that was when i left out to the bathroom. And party was promised to go till 5am but it didn't...

FOOD/DRINK:
Well although I saw signs to order food I didn't try it but I do trust that it was good. If you ever been to the Zanzibar you would know that there are normally two bars open but that night only the main bar was but drinks weren't long at all. Johnny and Red bull was regularly priced, I think. lol

SERVICE:
The service from the promoter was excellent. Even though my name wasn't on the list as promised I called him and he showed up and I was on the inside with out any problems.